After growing up watching his family grow coffee on their land in the Sidama region of Ethiopia, Amanuel Belay followed suit. But years of repetitive farming practices dulled his success. An environmentally sustainable TechnoServe program changed all that – and encouraged Amanuel to start helping other farmers.

Amanuel Belay grew up in Sidama, Ethiopia, one of the country’s leading coffee-producing regions.

Nestled between two lakes, the countryside rises up from flat plains to highlands, creating fertile soil and temperate climates for growing coffee.

Coffee is a critical crop for smallholder coffee farmers across Ethiopia, where coffee constitutes roughly 29% of the country’s total exports.

Amanuel – like many other children in the community – grew up watching his parents grow this ever-important crop on their 0.61-hectare farm.

Once he was an adult, Amanuel followed in their footsteps as a coffee farmer, planting new seeds on inherited land and replacing the old trees on land that was now his to manage.

But it wasn’t easy.

Challenges for Coffee Farmers in Ethiopia

While the Sidama region plays a significant role in Ethiopia’s status as Africa’s top coffee producer, environmental degradation and world coffee price fluctuations have raised issues of food security for many farmers and their local communities.

These concerns were real for Amanuel, who realized the productivity of his farm and the quality of the coffee were low compared to the inputs required.

Amanuel would often dig under the coffee trees canopy to remove weeds and “sometimes cut the roots of the coffee trees,” he says. This practice would reduce yields for some trees.

“I remember the fruitless efforts that I put into those years,” the now 54-year-old farmer reflects.

But Amanuel wasn’t prepared to give up. His wife and seven children depend on the farm as their main source of income. 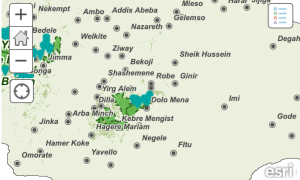 and long before coffee became the backbone of industries and economies – the plant grew wild in Ethiopia’s dense forests.

…And it still does.

Experience them for yourself by exploring interactive maps:

Improving Yields for a Better Income

In 2019, Amanuel joined a TechnoServe coffee program that was aimed at improving the yields of smallholder farmers in the Sidama region.

The training covered topics including:

Amanuel applied the learnings and quickly started seeing results. The trick, he noticed, was to implement these important practices over and over again: weeding regularly, composting and mulching under the trees, removing diseased trees, and pruning branches all helped Amanuel rejuvenate nearly 2,000 of his coffee trees after learning how to better care for them.

This past year, he reaped approximately 16,000 pounds of coffee cherries. That was a 25% increase over his previous harvest.

Amanuel hopes to get favorable yields again this year, especially from the stumped trees that are now flourishing.

“If I knew then what I know now, I would have harvested a lot [more coffee]. I have learned different skills from TechnoServe’s agronomy practical training,” Amanuel says.

The improved harvest has also helped Amanuel provide better food security for his family. In addition to the better yields from his coffee, Amanuel uses intercropping to grow haricot beans in his stumped coffee farm, which supplements the family’s income. He harvested more than 1,500 pounds and nearly 2,000 pounds of haricot beans in 2019 and 2020, respectively.

He also grows a variety of other crops such as the drought-tolerant enset (a staple food that looks like a banana plant), maize, and chilis.

These recent successes have greatly improved the standard of living for Amanuel and his family, who own two houses in the urban center of their district and have done renovations since improving coffee production.

Although Amanuel and his wife, Zewditu Gebiso, 45, still work on the farm regularly, they can also employ up to 20 workers to help with the harvests.

I’m proud of what I did to raise our income, improve the living standard of the family, buy assets, and hire up to 20 casual workers at peak time. I’ll continue learning and doing the best things to double the result by next year.”

One son rides a new motorcycle and another has opened a shop in town with Amanuel’s help. And the family doesn’t lack for food, as Amanuel and his wife produced beans, enset, and dairy products.

But a better life isn’t all Amanuel wants. He wants to elevate his community, too.

Encouraging His Neighbors and Elevating His Community

As Amanuel’s coffee production grew, he became increasingly vocal about spreading best practices in his village. He started with the next-door neighbor, then moved on to surrounding farmers.

Despite some initial hesitation in the community, Amanuel helped his neighbors see the value of growing coffee with good farming practices. It was easy for fellow farmers to replicate Amanuel’s success, as his results showed the importance of following a good process.

His dedication to elevating his community hasn’t gone unnoticed. Tegegn Yeakob, a neighbor of Amanuel, says: “I am changing [my coffee growing methods] after following Amanuel’s farming methods, which he learned from TechnoServe.”

And Tegegn is hoping the TechnoServe methods will help his coffee, too, as he’s constructing a corrugated house and sending four children to school.

This community building will be increasingly important as the Sidama region faces ongoing challenges with climate change, food insecurity, and economic recovery as farmers try to weather COVID-19.

“Amanuel’s accomplishment in coffee, his hard work, and willingness to share his experiences are more than just a model for farmers,” Tegegn adds.

“He’s an inspiration for us.”