Lucy Wacuka places a bucket of water on the floor in the middle of the room. She kneels down with a rag in hand, plunges it in the water, and glides it in large circles on the tile.

It’s a chore, but it’s also a reminder of an important accomplishment in her family’s life. A few years ago, this house wasn’t even finished–she and her husband were desperate to find the money to complete its construction.

Today, Lucy works inside an improved house as her husband, James Kinyua Kamanjiri, tends the crops on their small farm. The coffee on this farm became the means by which they finally finished their house–and accomplished much more.

But in 2017, coffee was also a source of heartache.

“My Whole Crop Dropped to the Ground”

That was the year that coffee berry disease–a devastating fungal infection that is becoming more common as the climate warms–hit their crop.

“By April, the heavy flowering on my farm was a sign, and I hoped for 1,000 kilograms of [coffee] cherry,” James recalled. “But by July, my whole crop dropped to the ground.” 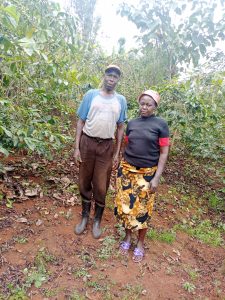 Lucy and James’s farm is one of the 500,000 smallholder coffee farms in Kenya today. Like many, they are spouses who work side-by-side on coffee plots to harvest the crop and tend to their coffee trees.

But like many farmers in Kenya, Lucy and James often struggled to provide for their families’ basic needs. The global COVID-19 pandemic pushed the country into economic distress, with an estimated two million additional Kenyans falling into poverty.

And the threats of climate change and environmental degradation loom larger now than ever before.

This became apparent to Lucy and James in 2017, when the coffee disease devastated their crops and their hopes for income that year. The couple had invested $250 to purchase fertilizers and other farm inputs, but harvested only 100 kilograms of coffee that year–10 times less than their expectations. The money they received from their coffee didn’t even cover their costs.

It was then that the couple learned about the program that would turn everything around.

TechnoServe and Nespresso partnered in Kenya and Ethiopia in 2013 in order to build the resilience of coffee-growing communities and help farmers earn a living income.

Over the years, TechnoServe has trained 87,000 farmers on regenerative agriculture, which helps coffee growers sustainably increase their yields while also restoring natural resources in their communities.

To help farmers further increase the value of their coffee, TechnoServe worked with wet mills—local processing facilities that form a vital link in the coffee value chain—to improve the quality of the coffee they processed. This helped farmers to become Nespresso AAA suppliers, producers who meet Nespresso’s standards for coffee quality, productivity and social and environmental sustainability, and earn better incomes. 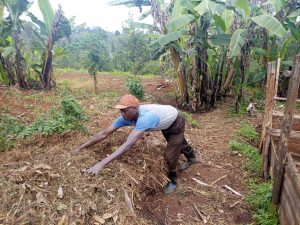 James was one of the farmers who learned improved agronomy practices, like mulching and composting, from the program. He also learned that coffee trees produce more when they just have a few stems, so he trimmed back the rest.

James was most surprised when he learned that his rigorous application of calcium ammonium nitrate—widely promoted to improve coffee yields—was a likely factor contributing to the high incidence of coffee berry disease he experienced in 2017. So he altered his coffee nutrition regimen by opting for the farming supplies recommended by the AAA agronomist, which resulted in both $100 in savings on fungicides and improved coffee production.

Growing Their Farm and a Brighter Future

After only producing 100 kg of coffee in 2017, James and Lucy’s yields increased dramatically in 2018. That was when they produced 1,160 kg of cherry–more than a tenfold increase. And just two years ago, James and Lucy harvested nearly double that amount, earning $1,300 in net income. 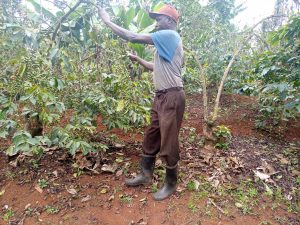 This improvement had a ripple effect on their family. The couple has since helped pay the school fees of two of their grandchildren and invested in vegetable farming to further diversify the family income.

And at the end of the day, they come home to the house that their improved coffee crop helped to build.