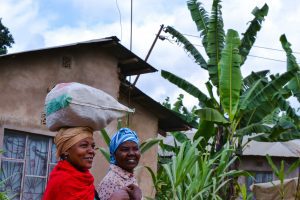 Rates of worldwide hunger were dropping slowly but consistently at the beginning of the 21st century. Unfortunately, that trend reversed in 2015. Before the pandemic, it was estimated that more than 820 million people across the globe would not have enough to eat. COVID is dramatically accelerating this issue, almost doubling the number by the end of 2020.

The global problem of hunger is most aptly characterized as a lack of food security. According to the United Nations, a person with food security must have “physical, social, and economic access to sufficient, safe, and nutritious food that meets food preferences and dietary needs for an active and healthy life.” When these standards are not met, it results in the stress and health hazards of food insecurity.

The most straightforward and severe form of food insecurity occurs when people lack access to the sheer calories required to sustain basic health. Hunger alone is not the only factor to consider. Food security deepens in complexity when nutritional needs enter the picture. Even when stomachs are filled, poor food quality can leave individuals, families, and communities with deficits in vital macro and micronutrients.

The physical and mental toll of insufficient food and nutrition is significant in both the short and long term.”

Food insecurity is a symptom of access, availability, utilization, and a secure environment which are often problems tied to issues of poverty, inequality, and marginalization.

Unless all four of these food security objectives are realized, the dangers of food insecurity are present.

Mapping the Effects of Food Insecurity

Food insecurity touches citizens of every populated continent. Rates are lowest in Europe and North  America, where a still substantial 7.9% of people experience moderate to severe food insecurity. But while the last five years have seen a decrease in food insecurity rates in these parts of the globe, the inverse is true elsewhere. Sub-Saharan Africa and Latin America are the most seriously affected by inadequate nutrition.

In 2019, more than half of the residents of sub-Saharan Africa experienced at least moderate food insecurity. Production shocks, macroeconomic challenges, and ongoing conflict resulted in sharp food price increases, though rates of food security were already poor beforehand.

Hunger is a potent enough obstacle for otherwise healthy adults, but the impact is especially great for vulnerable populations. Research has suggested that children who have experienced a lack of food during one time period are more than twice as likely to experience poor health a decade later. Recurring hunger again doubled the likelihood of future ill-health.

Even a relatively short period of insufficient nutrition can cause a significant impact during the first 1,000 days of a child’s life. Slowed physical and cognitive development have lifelong consequences. Around the world, 22% of children are stunted, meaning they are short for their age due to poor nutrition or repeated infections.

Insufficient nutrients for expectant or nursing parents are also a significant consideration. Poor nutrition is associated with a heightened risk of birth defects and future physical and cognitive problems.

Food Safety as an Essential Piece of Food Security

A varied and nutrient-dense diet is not enough to ensure food security. The foods must also be consistently safe to consume. Contaminated food is estimated to kill 420,000 people a year, and close to a third of them are children under the age of five.

Environmental pollutants are another factor. Food preparation and storage also come into play. Inconsistent ability to refrigerate or cook foods invites the growth of foodborne bacteria.

Even in nations with strong economic safety nets, the COVID-19 pandemic has caused worrying increases in food insecurity. Loss of income from reduced work or unemployment is a clear factor. In many parts of the world, the pandemic’s impact on food security has been even more severe.

Travel restrictions prevent food and related supplies from reaching people in need. If a product can’t get from the field to the processing center to store shelves, the resource may go to waste. Breaks in the supply chain may prevent food production in the first place.

Governments and private organizations alike have been severely disrupted. . In addition to border closings that prevent the movement of supplies and people, groups that provide food security support are seeing financial roadblocks such as budget cuts and fewer donations.

The pandemic has shown the necessity of continuing to fund projects that establish strong local food systems. A sturdy starting point gives communities the stability that makes it more likely to survive upheaval.

The ultimate goal of overcoming food insecurity must focus on building stable, sustainable, and local food systems. To truly target world hunger, global efforts need to be made to both enhance agricultural production, processing and trade, and people’s financial ability to acquire nutritious food.

Efforts to build local infrastructure benefit from a combination of private and public influences. In cases where public resources are overwhelmed, private resources can bridge the gap.

These solutions naturally vary by location. Earth-friendly, budget-friendly crops that grow well in a particular climate and provide suitable nutrition vary across the globe. One farmer may benefit from soil testing, while another thrives with access to lower-cost irrigation techniques.

Changing the World Through Food

The long-term presence of food security increases health and changes lives. Agricultural improvements bring the benefits of increased financial stability, and a more easily fed family empowers vulnerable and marginalized groups. For every $1.00 that is invested in a community’s nutrition, $16.00 is returned to the local economy.

Food security is an enormous problem, but solutions are not just possible, they’re happening. Changes are being implemented by countless communities around the world to connect people with filling, satisfying, nourishing food. There’s still a daunting amount of work to be done, but there is hope for a world without hunger and where people have the resources to remain food secure.