Fifteen years ago, when Rito Girón Hernández first started growing coffee, he saw it as a life-changing investment. Like many farmers in Honduras, he was first drawn to coffee production as a way to support his wife and two children in an area with high rates of poverty and limited economic opportunities outside of agriculture.

But as Rito soon found out, coffee growers here often struggle to keep their farms afloat or end up abandoning their crops to seek other sources of income.

“When my farm was affected by coffee leaf rust [a fungal disease associated with climate change], we had to change to another variety of coffee,” he recalls. “At that time, I sold my coffee to middlemen, and I wasn’t making a profit.”

Global coffee prices were another concern. After dropping in the latter half of the 2010s, they reached historic lows in 2019 — a decrease of roughly 60% from a high point five years earlier.

The one-two punch of leaf rust and low prices proved devastating for coffee farmers across Central America, where coffee is a cornerstone of the economy. In Honduras, coffee is one of the top exports, accounting for 5% of total GDP and supporting over 100,000 families like Rito’s. The story is similar in neighbors Guatemala and El Salvador.

Today, global coffee prices are rebounding — nearly double their lowest point in 2019. But while grounds for hope, many other factors contribute to long-lasting well-being for so many Central American families dependent on this crop. Below are three key factors that help coffee farmers achieve durable success in their communities.

Global Coffee Prices are Rebounding — How Can Farmers Benefit?

Like Rito once did, many coffee farmers in Central America have traditionally sold their harvests to intermediaries for low prices, leading to a cycle of reduced incomes and low investment on the farm. One of the best ways to help coffee farmers increase their revenues, in many cases, is to work with them to enhance the quality and yields of their coffee while promoting value chain improvements that enable farmers to earn a larger share of export prices. 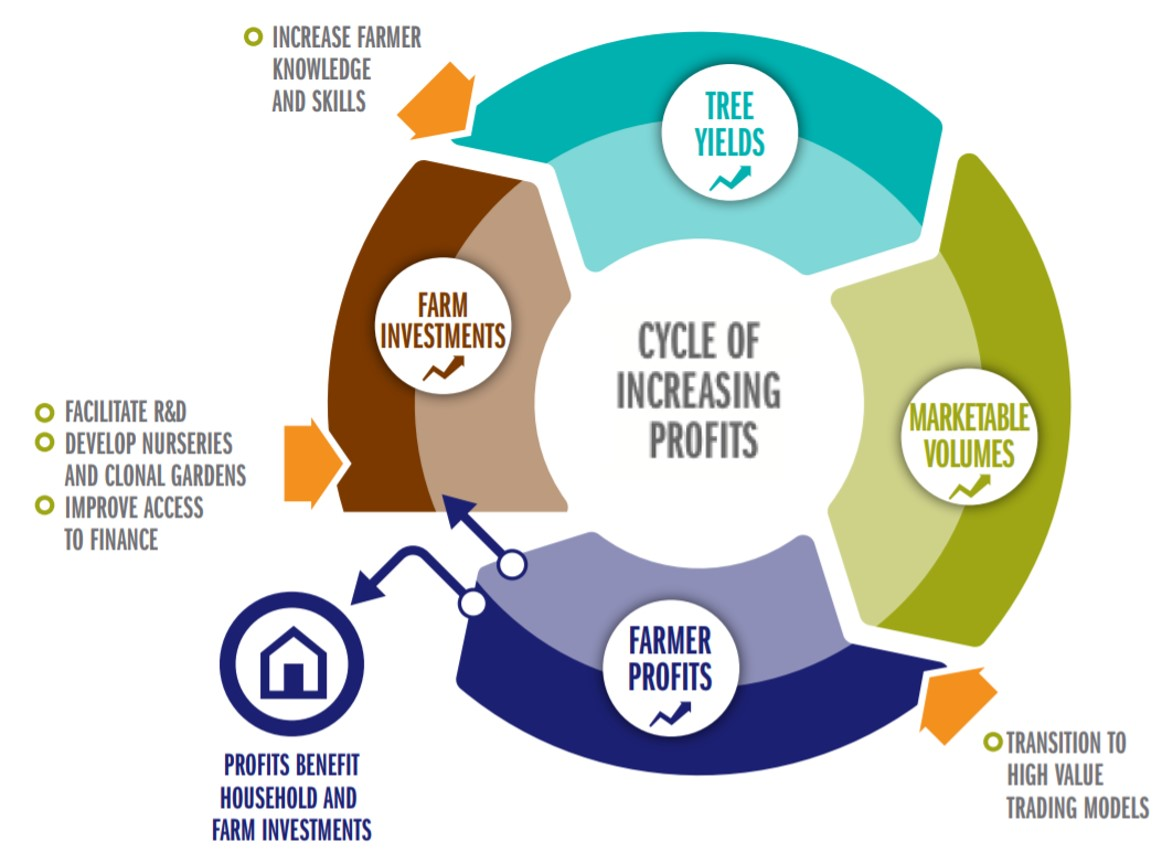 These prices are increasing again after historic lows, fueled by a drop in global coffee production largely from the largest producer Brazil. But while this is good news for most smallholder farmers, it is no substitute for the training and market connections that will insulate them from future price shocks.

Over decades working in coffee-farming communities in 14 countries across Latin America and Africa, TechnoServe has seen how this approach grounds farmers in profitable, self-sustaining business opportunities.

In Honduras, for instance, one of TechnoServe’s training programs helped 32,000 smallholder coffee farmers significantly increase the quality and yields of their coffee. TechnoServe then worked with hundreds of local coffee farmers’ associations to establish profitable contracts with exporters. Through these local, long-lasting partnerships, farmers improved their coffee revenue by 60%.

This market-based approach achieved similar results in Guatemala, El Salvador, and Nicaragua. In the latter two countries, the locally based TechnoServe team helped strengthen the coffee value chain by supporting farmer cooperatives and coffee nurseries to improve their operations. This improved the market system for the 11,000 farmers TechnoServe trained in improved coffee-growing practices.

Subscribe to our newsletter to learn more about how TechnoServe is helping build a sustainable global coffee industry that can lift millions of farming families out of poverty.

But no attempt to improve coffee livelihoods in this region can be effective without factoring in climate change. Central America is one of the regions most vulnerable to this phenomenon. Farmers face a growing host of threats to their livelihoods: pests and plant diseases, extreme weather events, unpredictable rainfall, and more. In November of last year, back-to-back hurricanes devastated many coffee-growing regions in Honduras and Nicaragua, forcing farmers to rebuild their damaged farms or search for income opportunities elsewhere.

While some environmental threats are unavoidable, climate-smart agricultural practices help farmers withstand these threats, improve their farm productivity, and even reduce their own environmental impact.

Some of these climate-smart practices include:

Rito first joined a TechnoServe program in 2016, a few years after the leaf rust outbreak threatened to destroy most of his coffee farm. “The program taught us how to manage the farm, how to regulate the shade, and how to prepare organic fertilizer,” Rito says. “Before, I only applied chemicals, but now I apply organic fertilizers, and I have seen the change in the color of the leaves.”

Since participating in the TechnoServe training, Rito has increased his coffee yields by 220%. “With the money I earned, I was able to change the roof to our house, build another little house, and even buy a car,” he reports proudly.

TechnoServe’s agronomy training is rooted in decades of experience across multiple crops and geographies, but it is tailored to local needs and adapted based on changing conditions.

For example, after a drought in Honduras in 2019, the team realized that establishing vetiver grass water filtration systems would not be feasible for all farmers because the plant requires abundant water availability during the early stages of growth. In response, TechnoServe identified new producers living in areas where weather conditions were more favorable and worked with the initial producers to identify alternative solutions.

Intercropping — the process of planting multiple crops on the same piece of land — has both environmental and economic benefits for farmers. Today, Rito’s coffee flourishes under the shade of banana trees, which provide protection from the harsh sun, sequester carbon, and reduce soil erosion. A variety of crops provides farmers with important sources of cash at different times of the year when other crops are off-season.

TechnoServe uses an approach grounded in local knowledge to help farmers identify additional crops that make sense based on several factors, including microclimate, access to markets, and technical expertise necessary to grow the crop successfully.

But opportunities off the farm are important too — especially since farm size will naturally decrease when parents pass on land to more than one child. In the Huehuetenango area of Guatemala, for instance, farmers surveyed by TechnoServe reported that farm size roughly halved every generation. (We will explore ways to build entrepreneurship and employment opportunities in Central America in a future post.)

Rito wanted his own son to have access to a range of opportunities. “When I started with the farm, my vision was to educate my son,” he says. “I wanted him to become a professional.” With Rito’s improved coffee income, he invested in education for the young man, who was then able to secure a well-paying job in a town nearby. His son is now raising a family of his own and stops by to visit often.

“My family helps me around the farm now,” says Rito, surveying his long rows of bright green coffee trees and other crops. “Our lives have improved quite a bit.”