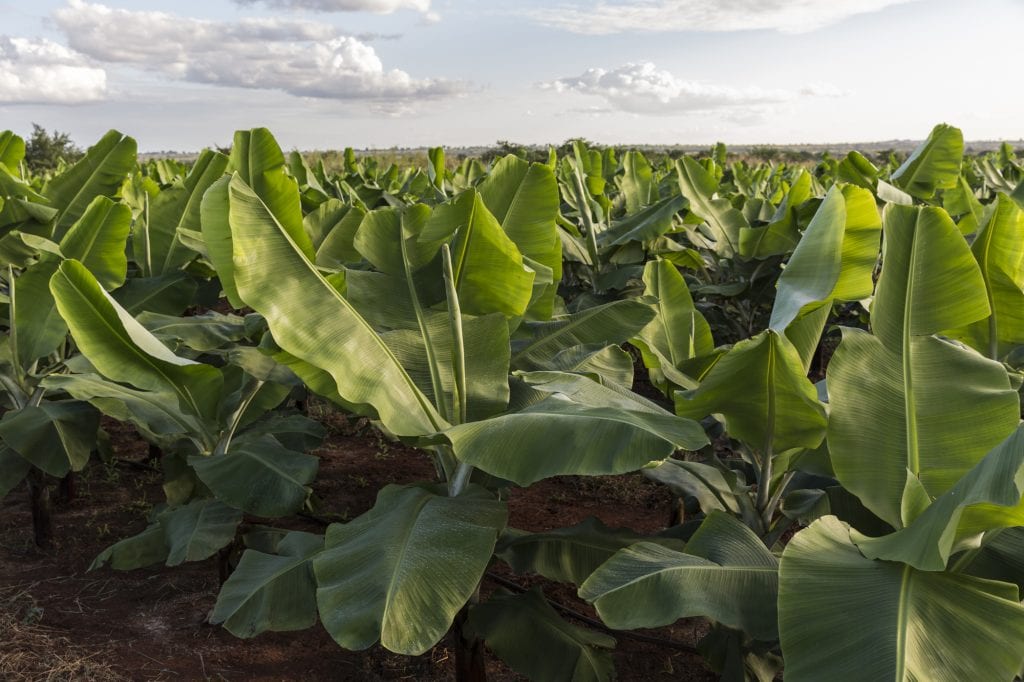 Mozambique, with its mild tropical climate, fertile soils, and long coastline, has great conditions for growing bananas — a crop that is important for both subsistence and trade. However, with the outbreak of two devastating diseases, Panama Disease in the north and Banana Bunchy Top Virus (BBTV) in the south, Mozambique is facing a major threat to banana production that could spread to the whole continent. In response, TechnoServe has been working with the Mozambican Ministry of Agriculture and Food Security (MASA), with funds from the U.S. Department of Agriculture (USDA), to strengthen the Mozambican banana industry so that it can contain and control the spread of the diseases.

Following a civil war that ended in the mid-1990s, the production of bananas in Mozambique has increased sixfold, as smallholder farmers returned to their fields and started producing the crop, and large commercial plantations were established. In 2017, the country produced approximately 580,000 tons of bananas, 75% of which were produced by smallholder farming households, who grow it as an important source of food and nutrition. The industry plays an important role in Mozambique’s economy; with roughly 17 commercial banana producers, nearly 20% of the country’s total production is exported, and around 5,000 Mozambicans are directly employed in the sector, while thousands of others are involved in distribution and retail.

In July 2013, Panama Disease was found on the Matanuska farm in northern Mozambique. At its peak, this farm was the largest commercial banana farm in the country, exporting nearly 50,000 tons annually and employing over 2,400 workers. The farm eventually shut down operations in 2016 due to losses from the outbreak (though it was later purchased and is operating in a limited capacity by Jacaranda Agricultura). Since then, the disease has spread to three other commercial farms in the north.

Many believe that the [banana] disease’s impact on smallholder farming households could be catastrophic, as it would threaten the livelihoods and food security of local communities.
– Ingrid Sikma, TechnoServe program manager

Panama Disease is caused by a fungus that prevents the banana plant from receiving nutrition and water, causing the plant to wilt and eventually die. The fungus spreads through contaminated soil, which means it is not only carried by plant material, but also by vehicles, clothes, footwear, and tools. As the fungus stays active in the soil for decades, the disease is nearly impossible to eradicate.

In the south of Mozambique, BBTV was detected in the Gaza province on two separate farms in 2016. Since then, it has spread to other locations, raising alarm that the disease could be eventually affect all farms in the south.

BBTV affects the “bunchy” top leaves of a banana plant, a clear symptom of affected banana plants, which rarely produce bananas or produce stunted bunches.​ This virus can be transmitted through infected plant suckers and banana aphids. Regular inspection of banana plants for symptoms is important to ensure timely detection of the virus. Infected plants should be destroyed by injecting a pesticide solution into the banana plant that attracts and kills the aphids. 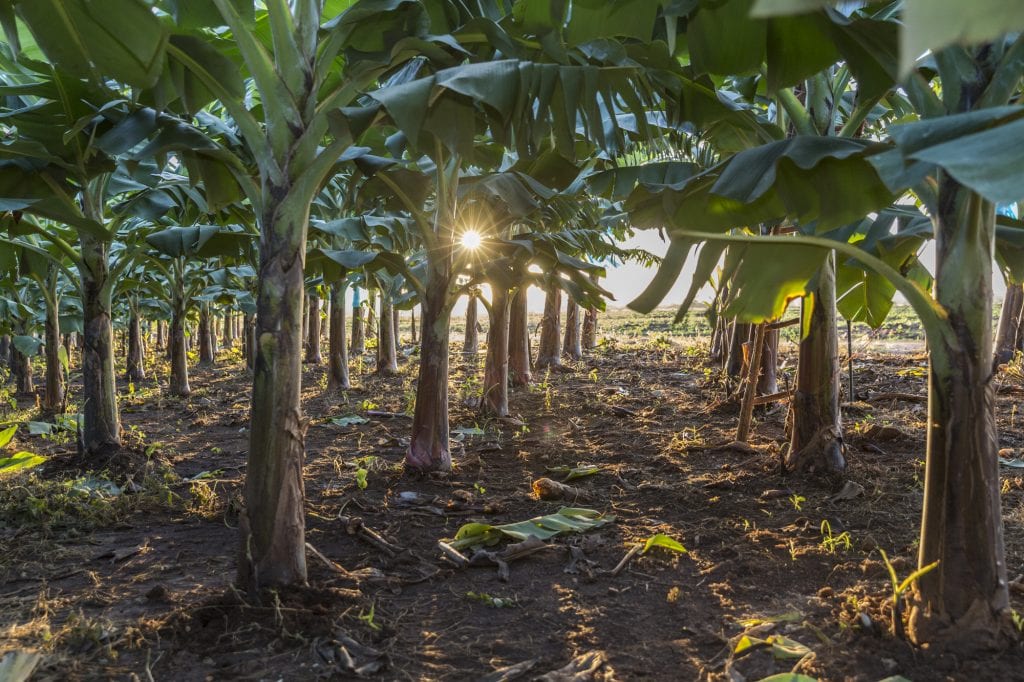 Thus far, 1,500 hectares of bananas have been lost to Panama Disease. However, Mozambique still has many commercial banana growers across the country who together use around 4,000 hectares of land for banana production. Moreover, if the spread of BBTV continues, the disease could affect all of the commercial banana farms in the Maputo province, which employ 4,500 workers and exports $30-$40 million per year.

“Smallholder farmers are also at risk of their crops contracting these diseases,” says Ingrid Sikma, TechnoServe program manager. “Perhaps even more than the commercial farms, as they often do not have the knowledge or financial means to prevent and control these diseases. In fact, many believe that the disease’s impact on smallholder farming households could be catastrophic, as it would threaten the livelihoods and food security of local communities.”

Recognizing the urgent need for action, TechnoServe established the Banana Industry Grants Facility (BIGF), funded by the USDA and monitored by MASA, with the intention of putting in place prevention measures; early detection and reporting of symptoms; quarantine; and monitoring measures critical to containing both diseases.

To date, TechnoServe has allocated BIGF funds on a cost-match basis to nine commercial farms to implement the required containment measures, including installing perimeter fencing, car and foot baths, and quarantine signage, as well as raising community awareness. In addition to containment, the BIGF has funded the replanting of lost hectares with resistant varieties, an important step in ensuring the survival of the industry.

“Today, if you go to a farm, you’ll see that fences, car and foot baths are already installed,” explains TechnoServe’s Zarina Osman, the grants manager for the BIGF project. “This is important to control the circulation of the neighboring population and visitors, preventing the spread of the disease through people, animals, and cars to neighboring communities and to other areas.” 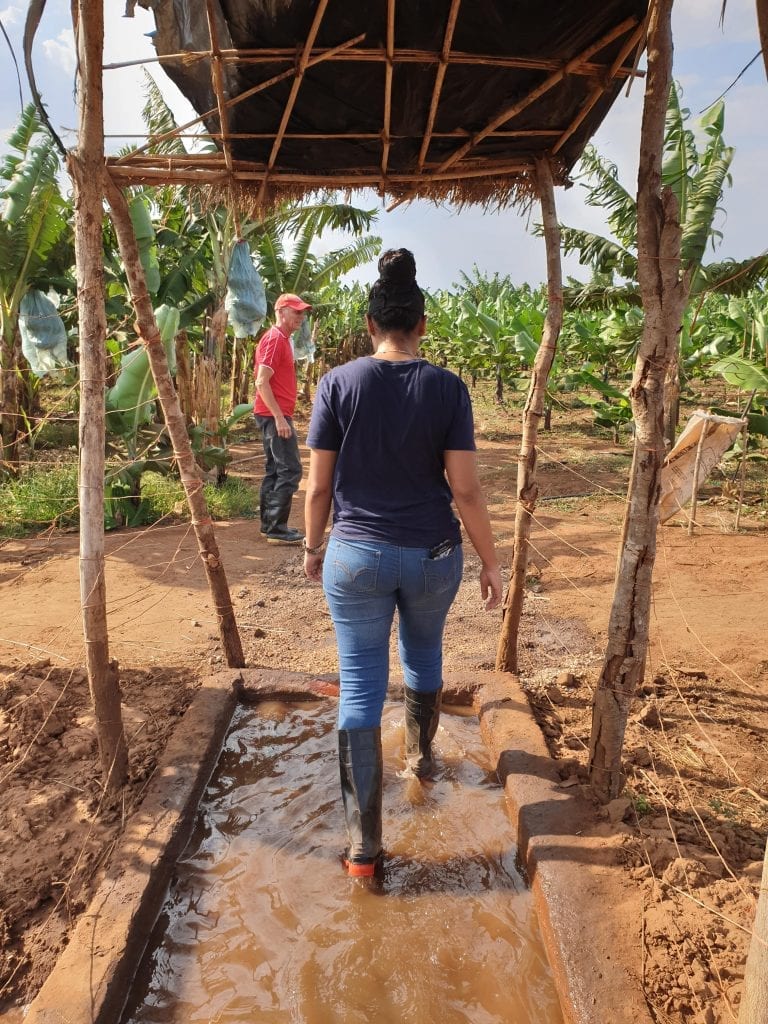 The BIGF has also identified and funded seven research projects aimed at solving specific issues in the industry. For example, developing rapid tests that can detect and measure disease in plants, soil, and water could help farmers and governments identify the fungus early.

TechnoServe also worked to establish two public-private partnerships (PPPs) between BananaMoz, MASA, and other partners to build monitoring systems for Panama Disease and BBTV. In the north, BananaMoz and MASA are working with the Institute of Agricultural Research (IIAM), which is responsible for mapping the activities related to detection and containment of the disease, as well as providing a laboratory and personnel.

In the south, BananaMoz and MASA have contracted CropWatch Africa, a service provider specializing in BBTV detection and area surveillance, to provide a cloud-based platform for collecting data for monitoring purposes and to train technicians from MASA and commercial farms in identifying BBTV symptoms and correctly eradicating infected plants. With the data collected by these PPPs, MASA and BananaMoz are able to make informed decisions regarding national prevention, eradication, and control strategies for the diseases.

In November 2019, more than 120 scientists and researchers from universities, NGOs, and government gathered at a conference in Maputo organized by TechnoServe and sponsored by the BIGF to discuss the current status and future of the banana industry in Mozambique. The conference focused on sharing best practices from the efforts in Mozambique and abroad to prevent, control, and contain these two diseases. 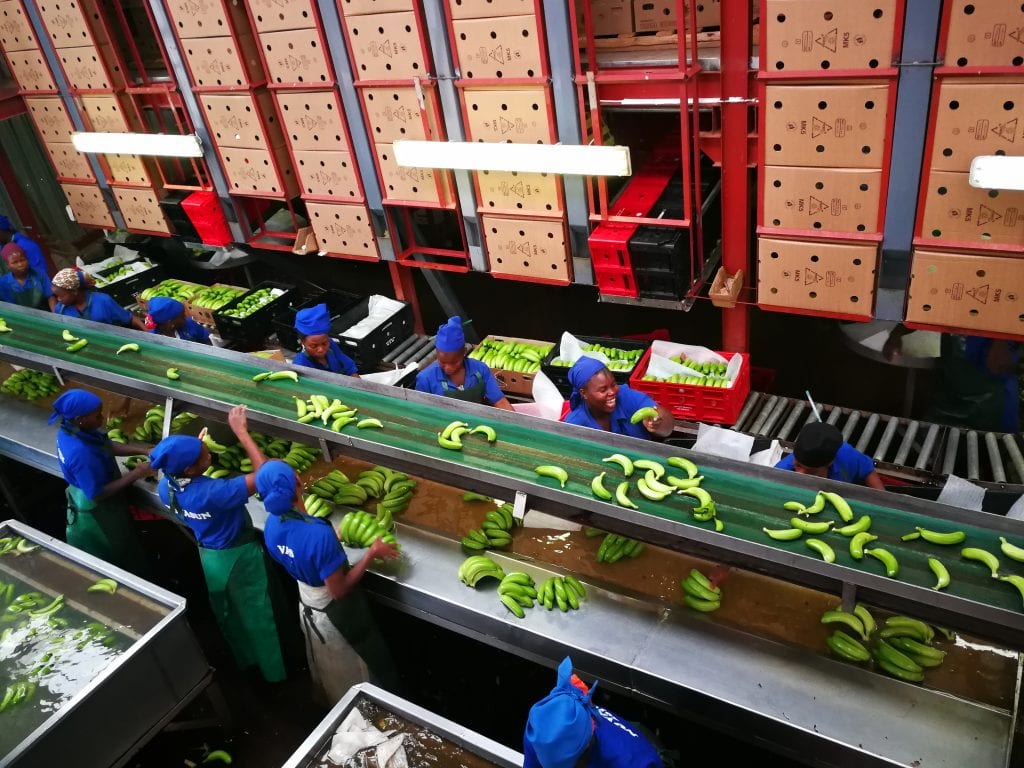 Laura Geller, Senior Agricultural Attaché for the USDA, spoke about the United States’ role in supporting the Mozambican banana industry; the US has been a key player in the past few years through the BIGF.

“In 2017, the U.S. Department of Agriculture sought to help the government of Mozambique to address Panama Disease and BBTV with a $4.5 million government to government grant. The objective of the project is to reduce the impact of these diseases on the Mozambican banana industry, both in the north and south,” Ms. Geller says. “USDA is proud to be part of this important work, but we know there is much more to be done to contain the spread of plant diseases.”

Though the BIGF is closing in early 2020, the fight to control banana diseases in Mozambique is just beginning. In order to fully protect banana production, the Mozambican government, commercial producers, communities, and scientists need to continue to join forces to focus on containing and living with these banana diseases. Failure to do so could be catastrophic for commercial banana production, as well as food supplies and employment opportunities across not only Mozambique, but the whole continent.