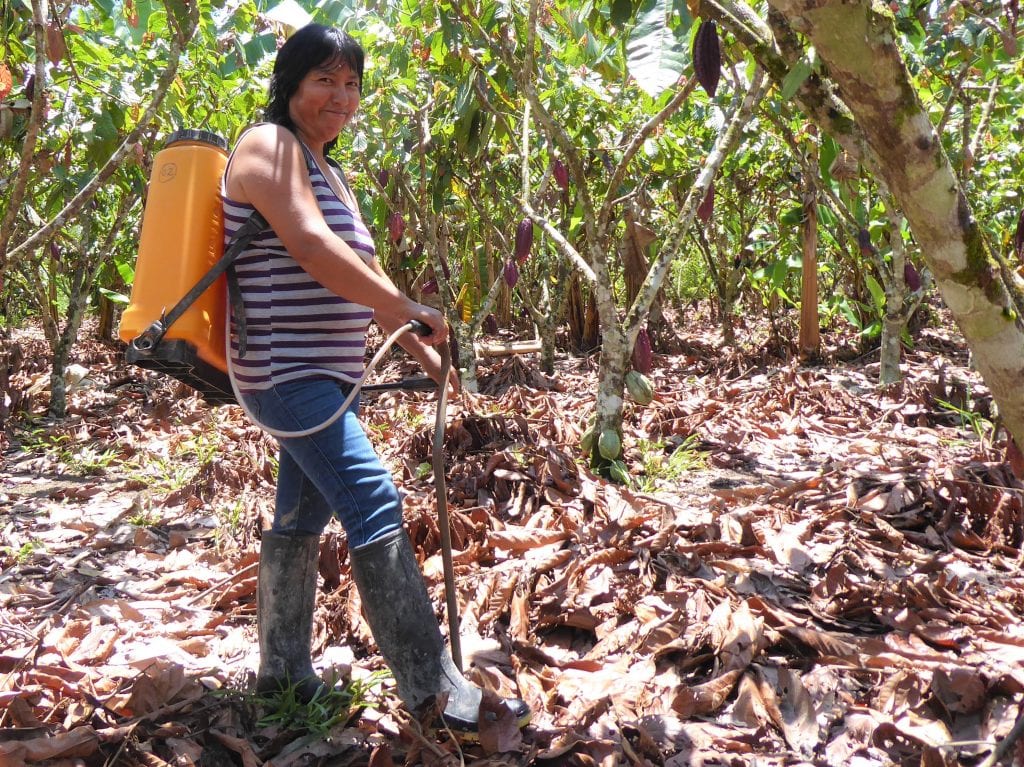 Leonarda Chávez moves between her cocoa trees with a strange-looking contraption slung across her back: it resembles a yellow jerry can attached to an oversized tent spike. At four spots around each tree, she sinks the spike into the earth and pumps a small handle on the jerry can. Then she moves on to the next tree.

Leonarda is applying fertilizer on her cocoa farm. It’s hard work – the late-morning sun is beating down on the farm, located on the banks of the Huallaga River in Peru’s Amazon basin – but Leonarda can’t help but think of how much quicker and easier this injector backpack has made it to manage the farm.

I used to stay at home cooking and washing, and my husband went to the workshops…But when he left, if you aren’t learning how to manage the farm, how are you going to succeed?”
– Leonarda Chávez

Leonarda needs every free minute she can get, because she is working to patch together a life that was recently torn apart. It was just a few years ago that her husband left, abandoning her with an overgrown farm, a stack of unpaid debts, and three children to support on her own. “It felt hopeless, it felt sad,” she recalls. At one point, she didn’t want to continue living. But her children reminded her that she needed to keep fighting, that she could persevere.

Getting the farm into shape was daunting, but she received a little help at just the right time. In 2017, she enrolled in the MUJERES project – a partnership between TechnoServe, the West Foundation, and the Manhattan Beach Community Church. This pilot program helps women heads of household like Leonarda learn and implement good agricultural practices. 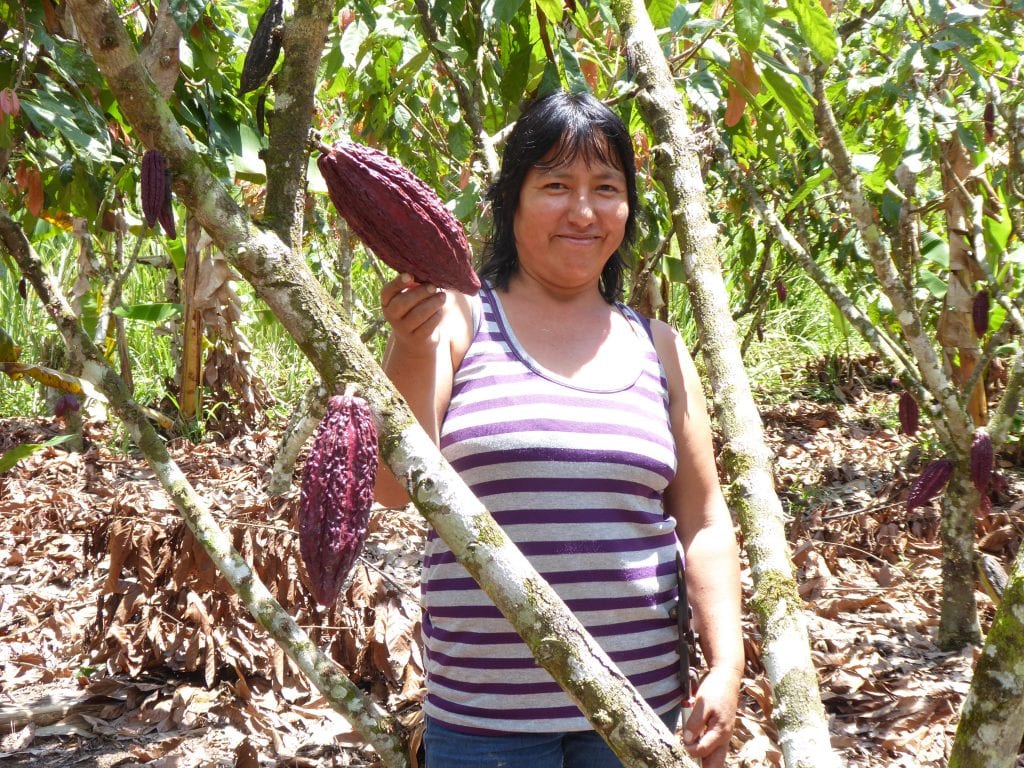 For Leonarda, attending agronomy training was something new. “I used to stay at home cooking and washing, and my husband went to the workshops…But when he left, if you aren’t learning how to manage the farm, how are you going to succeed?” She learned a number of new practices for her farm, but the one that made the greatest impact on her was the use of the injector backpack.

Traditionally, farmers have applied dry fertilizer to their cocoa trees, spreading it on the soil under the tree and waiting for the rain to carry it down to the plant’s root system. But that requires farmers to clear out the fallen leaves and other organic matter from under every tree every time they apply fertilizer – laborious and time-consuming work. In addition, when the rains fail, as they typically do during the summer, the trees don’t receive any fertilizer, limiting their production.

With the injector backpack, farmers can apply liquid fertilizer directly into the soil, where it is more easily absorbed by the root system. Because farmers don’t have to clear the land, they are able to complete the task much faster: participants estimate that it has reduced the time they spend applying fertilizer by 75%. For the participants in the MUJERES project who are running the farm on their own, the time saving is particularly important, because they often don’t have help from family members and can’t afford to hire day laborers. The liquid fertilizer also helps to boost productivity: because it doesn’t depend on rainfall to reach the plant’s roots, farmers can use it year-round. “The liquid fertilizer works so much better, and it’s a lot faster. Before, I barely harvested anything,” says Leonarda.

Before, I saw the bad side of everything, everything seemed bad to me. But thanks to the workshops and training, I’ve been able to flourish.”
– Leonarda Chávez

The MUJERES program provided training on the injector backpacks and also set up a financing plan so that the participants could purchase the tool for an affordable price. As a result, nearly one-third of the farmers have been able to purchase the tool already, and more plan to do so soon. Based on TechnoServe’s success introducing the use of the backpack to the region, a number of other organizations and the private sector have adopted its use.

Simple innovations like the injector backpack are making a big difference in the lives of women cocoa farmers. Participants in the MUJERES project have experienced average yield increases of 185% since joining the program.

In Leonarda’s case, production has increased five-fold, leading to a substantially higher income. She is using the earnings to support her son, who is in vocational school, and her daughter, who is studying in high school. “With your kids, it’s not an expense. It’s an investment,” she says. After passing through some dark moments, Leonarda has a brighter outlook. “Before, I saw the bad side of everything, everything seemed bad to me. But thanks to the workshops and training, I’ve been able to flourish.”