A farmer’s tough journey to a sustainable income through coffee highlights the resilience of smallholder farmers. Hear about how Sinderi turned a challenge into an opportunity – and brought her community along for the ride. 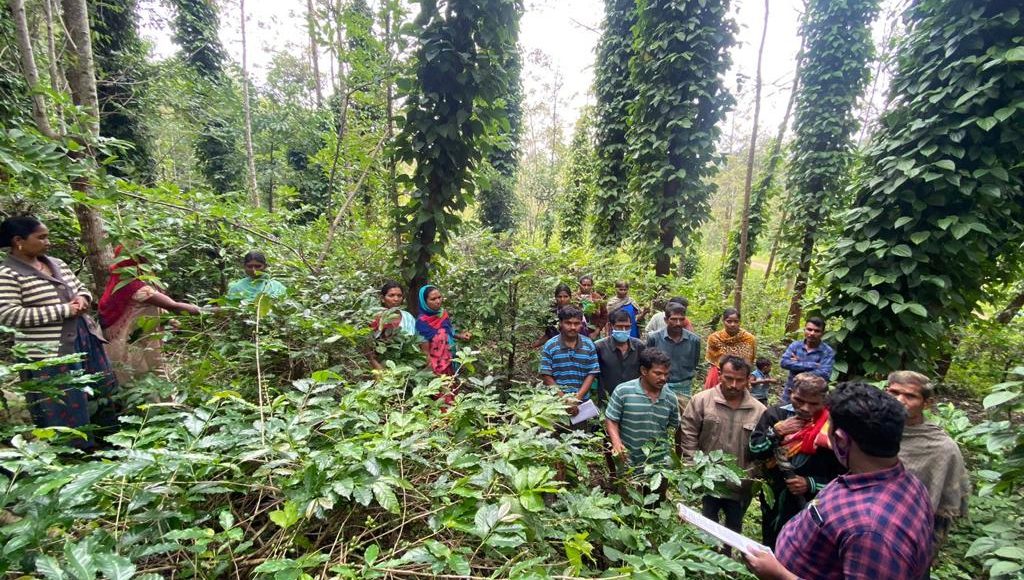 Sinderi Poose is – and always has been – a farmer from the Similiguda village in the Araku Valley of Andhra Pradesh, a south-eastern coastal state of India.

Her family grew crops for their survival – including rice, grain, and lentils – on a small piece of land they owned in the village.

But the weather conditions – especially heavy but sporadic rain – around the hilly region, along with a lack of any other sustainable livelihood options in the area, made for a real challenge.

With poor infrastructure and irrigation systems, their crops were regularly destroyed by monsoon rains and heavy winds that cut through the hillsides, causing soil erosion and eventual crop loss.

Down on the flat plains, the rice they grew just wasn’t enough to make up for these losses and ensure food security for the family.

The challenges for farmers in Andhra Pradesh prompted the Indian government to encourage farmers like Sinderi to diversify and grow income-generating (or “cash”) crops like coffee or black pepper.

Sinderi chose coffee, which she started growing in the early 2000s. Sinderi and her husband were among the first farmers to receive training on how to plant coffee seedlings provided by the Integrated Tribal Development Agency on a half-acre of land leased to them by the government.

But her dreams of a better life for her family quickly ran up against a harsh reality. “We were all being exploited by the traders,” she says. They often felt cheated by misinformation, for example, and underpaid. Despite working tirelessly on their farm, they remained mired in poverty.

At that time, Sinderi could have never imagined that her life was about to turn around.

Today, Sinderi and her family of 10 – including her two sons, their wives, and children – make the majority of their family income through the coffee plantations they’ve nurtured over the years.

But the story of them generating real profits out of their coffee fields is a rocky one.

Coffee in India: A Quick Recap

India is the seventh-largest coffee producer in the world and the third-largest in Asia, with 98% of coffee-producing farmers being smallholders (most of whom own less than two acres of land).

Andhra Pradesh is one such non-traditional, coffee-growing region of India, with over 93,000 smallholder tribal coffee farmers. Coffee and black pepper are the only cash crops grown in the hills, and most farmers, like Sinderi, depend on government-leased land holdings.

A Disappointing Start in Andhra Pradesh

After planting their coffee saplings in the early 2000s, Sinderi and her family sold their first batch of coffee in 2005 as ‘sundried’ coffee – dried directly after picking – with the skin removed manually as they didn’t have the right machinery. Because of their small plot and low production, they sold only a small amount of coffee, earning only INR 700 (roughly $9.29) as a family in the first year and leaving them far below the poverty line.

Over the years, as Sinderi’s sons grew up, they each received more land from the government. Although the family’s overall land-holding eventually increased to three acres, the prices they received for the coffee remained consistently low.

Sinderi’s younger son, Bangaraju, recalls that in 2015, they sold 200 kg of parchment coffee – coffee at an intermediate stage of the drying process – for the first time at INR 80 ($1.06) per kg, which was 30-40% lower than the market price. To make the situation worse, the local traders often held back 50% of the payments for up to five or six months.

After putting immense effort into cultivating and processing the coffee every year, Sinderi and her family felt their efforts were hardly worthwhile. Despite three acres of land and an entire year spent tending the coffee trees, the 10-member household still earned an annual revenue of only INR 16,000 (roughly $212) and continued to live in extreme poverty.

In 2020, TechnoServe, with grant support from the Walmart Foundation, started an initiative in the region by partnering with a farmer producer company (FPC) called Thoorpu Kanumula FPC Limited (TKFPCL).

Sinderi heard about the FPC, and wanted to learn more.

During their initial meetings with the FPC members, Sinderi and Bangaraju were slightly apprehensive despite being told about the benefits of joining the company. But their doubts finally vanished when they received upfront payments for their coffee – something they had long needed – and observed the transparency in the weighing methods used.

They haven’t looked back since.

Joining the FPC made a huge difference for Sinderi, her income, and her life. These farmer-led companies not only increase the share of the export price for farmers but also bring together otherwise scattered communities.

Selling through an FPC helps reach more differentiated buyers, aggregates volumes for sale, and helps with sales preparation like quality and grading information, along with improving the marketing experience overall.

Sinderi explains that the traders they used to work with would exploit them with “lack of pricing transparency, weight reduction, and delay in payments. On the other hand, the FPC made  payments beforehand and gave a much better price. Now my entire village has become part of the same organization, re-instilling a sense of community amongst the residents.”

Last year, Bangaraju also became a lead farmer, meaning he helps others join the company, and he mobilized every family in his village to become FPC shareholders.

Today, the Thoorpu Kanumula FPC has 100% representation from his village: 35 shareholders from 35 families. With this participation success, Bangaraju was able to procure nine tons of coffee from his and another nearby village in the 2020-21 coffee season.

“Getting a good price for our coffee has encouraged us to improve the quality of the coffee we sell,” says Sinderi, with gleaming eyes. She and many other farmers from the region have now started seeing coffee as a source of regular income. The FPC’s support and clarity in procurement have made them confident about the potential of their coffee plantations.

Including Sinderi’s family, TechnoServe’s program has impacted the lives of more than 2,300 coffee farmers in the region over the last two years. The Sustainable Livelihoods for Smallholder Farmers program in Andhra Pradesh aims to reach up to 3,500 coffee farmers through seven farmer producer companies by the end of 2023.

Sinderi, Bangaraju, and their family are now very happy with the returns they received for their coffee last year. With the increased income, Sinderi, Bangaraju, and their big family are starting to plan for a better and brighter future for themselves. Sinderi’s 5-year-old grandson, Barath, was enrolled in school this year, and her 2.5-year-old granddaughter, Sravani, will start next year.

Donate today to help smallholder farmers like Sinderi get ahead.