In Benin, the cashew industry has the potential to help hundreds of thousands of small-scale farmers lift themselves out of poverty. However, poor agricultural practices often limit their productivity and incomes. TechnoServe is using remote sensing and machine learning to map cashew production and target agricultural training to farmers who need it most. 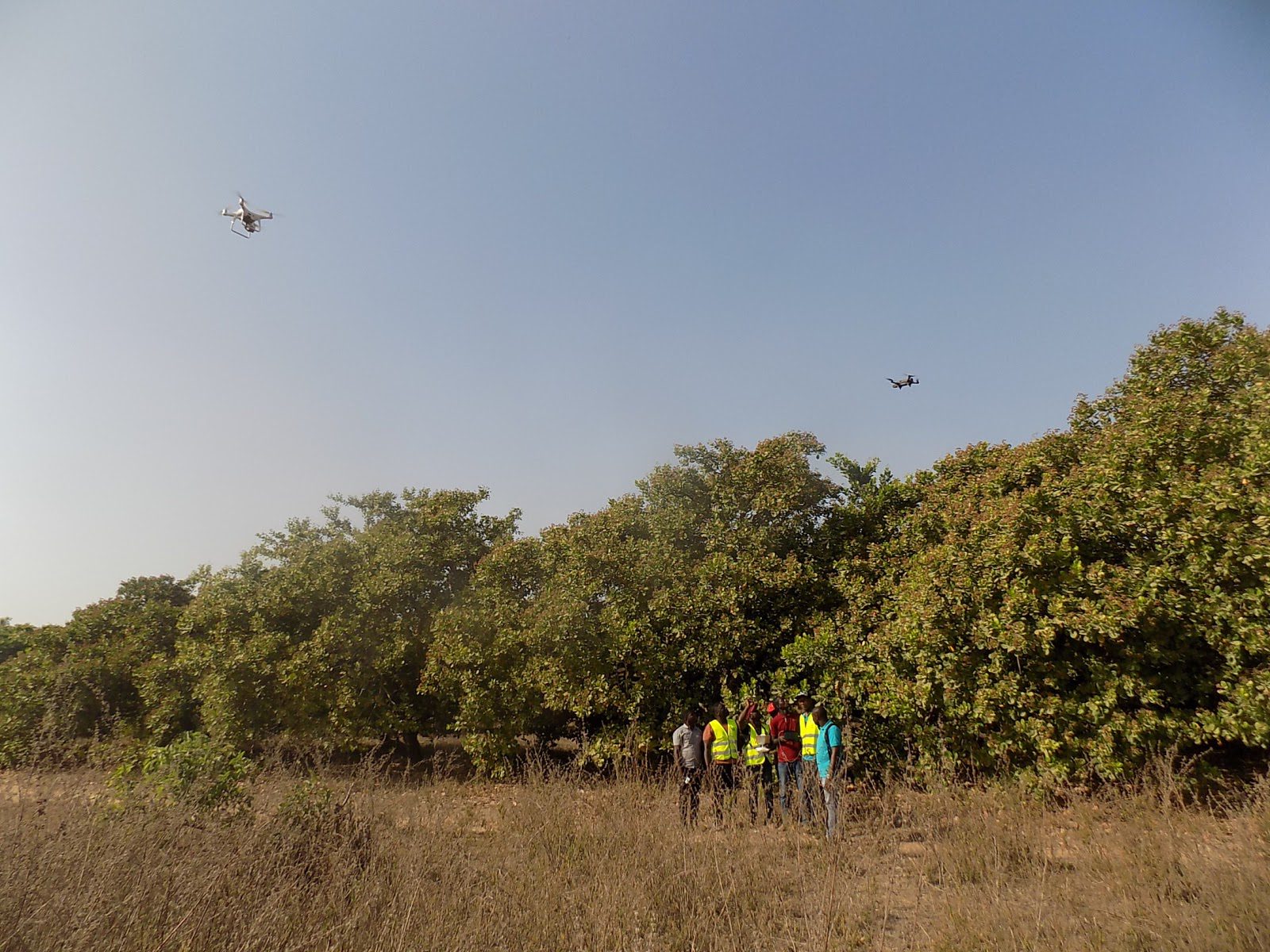 In the bright blue sky above an orchard of cashew trees in Benin, an object the size of a large bird skims the air. Soaring above acres of farmland, this drone captures hundreds of images within minutes, which tell an important story about the health of the crops below.

For approximately 200,000 farming families in Benin, this information is critical to their hopes of a good cashew harvest and the income to build a better life. Cashew represents almost 10% of the country’s national export earnings, but smallholder farmers often lack the skills and training to maximize the potential of their crop. Now, the latest technology is enabling the spread of agricultural information on a scale that could change the fortunes of hardworking farmers across the country — and the region.

Challenges on the Farm

Many smallholder farmers in Benin do not use good agricultural practices on their farms, either because they are not aware of them or because they are perceived as too costly. Simple practices like proper weeding and allowing sufficient space between trees to avoid leaf canopies touching can make a major difference in the amount and quality of cashews that farmers can produce.

Without this knowledge, farmers often struggle with low yields and limited income. With the Benin government vowing to triple cashew production by 2027, the issue of identifying and training those farmers who aren’t practicing the best agricultural techniques has become critical.

In Benin, cashew trees are often planted irregularly with other kinds of trees and crops. So even if you have great overhead images of farmland, it would take a lot of time to identify which are actually cashew trees — before you can even start analyzing how well those trees are maintained.”
— James Obarowski, TechnoServe Country Director, Benin

Since 2015, with funding from the U.S. Department of Agriculture (USDA), TechnoServe has helped smallholder cashew farmers in Benin improve their yields, boost their incomes, and increase domestic processing. With additional co-funding from Wehubit in 2019 and USDA in 2020, the CajùLab initiative has been using emerging digital solutions such as drones and machine learning to promote farmer adoption of climate-smart agricultural practices, with tools and impact scaled across the entire BeninCajù program.

“Cashew allows me to live,” says Biba Saka Koto, a cashew farmer in Benin. “In the years before I participated in training with BeninCajù, my two hectares produced five bags. Now I’m selling 15 bags this year.”

But how can agricultural trainers know which farmers need help? Currently, trainers visit farms on foot, wandering rows of cashew trees and jotting down notes on any signs of poor farming practices. While “ground-truthing” agricultural information is essential, it doesn’t allow trainers to identify and support farmers on a large scale.

Now, technology known as remote sensing may change all that.

Remote sensing is the process of acquiring information from a distance. It often involves drones, airplanes, and satellites, which can provide important aerial imagery. Drones provide high-resolution imagery but can only cover a small area, while satellites cover a large area but can be limited by cloud cover and other issues. To get the complete picture, analysts layer together several sources of information, including ground data collected by survey teams.

All this imagery provides a treasure trove of agricultural information — but it still has to be analyzed on a wide scale. Enter machine learning: teaching a computer to make intelligent assessments about the imagery it collects.

“In Benin, cashew trees are often planted irregularly with other kinds of trees and crops,” says James Obarowski, Country Director in Benin. “So even if you have great overhead images of farmland, it would take a lot of time to identify which are actually cashew trees — before you can even start analyzing how well those trees are maintained.”

So how do you teach a computer how to identify a cashew tree?

TechnoServe partnered with the University of Minnesota to develop and “train” a machine learning algorithm to analyze satellite images to identify cashew trees. As the computer gets progressively more accurate, it allows program staff and policymakers to quickly determine which farms need more agricultural support, or where deforestation is occurring. Then, organizations like TechnoServe can micro-target the farms that need the most training — saving time, effort, and money. 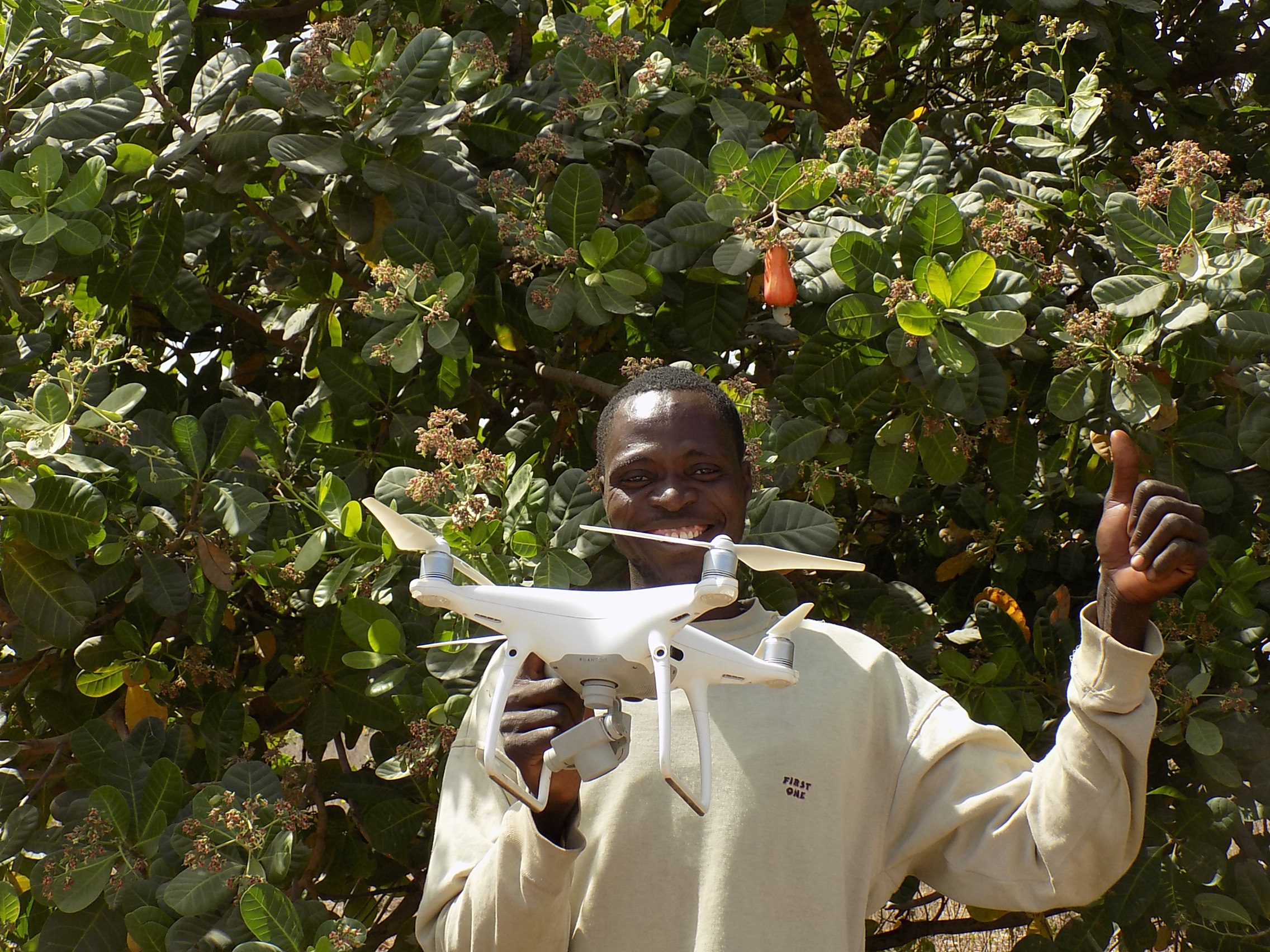 Early on in the project, TechnoServe worked with partners like Planet Labs and the University of Minnesota to identify what resolution data would be needed for the project. The team ultimately determined that temporal imagery — imagery that creates a composite image of a location from multiple images over a period of time — was better than higher resolution imagery at a single point in time. Using temporal imagery reduces the risk of poor visibility due to cloud coverage.

The team also decided that for identifying cashew plantations over a large area, drones would not be practical. Instead, the team selected Planet Labs PlanetScope satellite imagery with multi-spectral 3.5 m/pixel data.

To “train” the algorithm, the team used a different set of high-resolution 50 cm/pixel data from Airbus Pleiades satellites for a 1,000 square kilometer area. Part of the area was used to train the algorithm on what a cashew farm looked like relative to forest, bare land, or urban areas, and part of the area was used to validate the accuracy of the algorithm. The team at the University of Minnesota worked closely with the TechnoServe ground team to label the training and test data sets.

The combination of PlanetScope satellite imagery and a carefully labeled ground data set made it possible for the research team at the University of Minnesota to develop the machine learning algorithm to map Benin cashew.

Targeted Training on the Farm

The University of Minnesota and TechnoServe are now able to use satellite imagery to identify cashew plantations with over 85% accuracy, enabling the team to target farmer training more efficiently. Once TechnoServe identifies farms that are most in need of assistance, the team reaches out to those farmers directly — improving efficiency and enabling impact at scale.

Cashew allows me to live. In the years before I participated in training with BeninCajù, my two hectares produced five bags. Now I’m selling 15 bags this year.”
— Biba Saka Koto, cashew farmer in Benin

With improved agricultural practices, farmers then increase their productivity and incomes, ultimately leading to improved, sustainable cashew production throughout Benin and increased trade and exports.

Learn more about how TechnoServe is using digital solutions to fight poverty.

A new mother in Benin began making reusable diapers and menstrual pads after having her son. She quickly realized there was an opportunity to help other women by creating sustainable menstrual products – and empowering the next generation.

Emerging technology solutions combining aerial and phone imagery with machine learning could solve long-standing challenges in getting accurate, timely data for trade and investment decisions in the global nut and dried fruit industry.