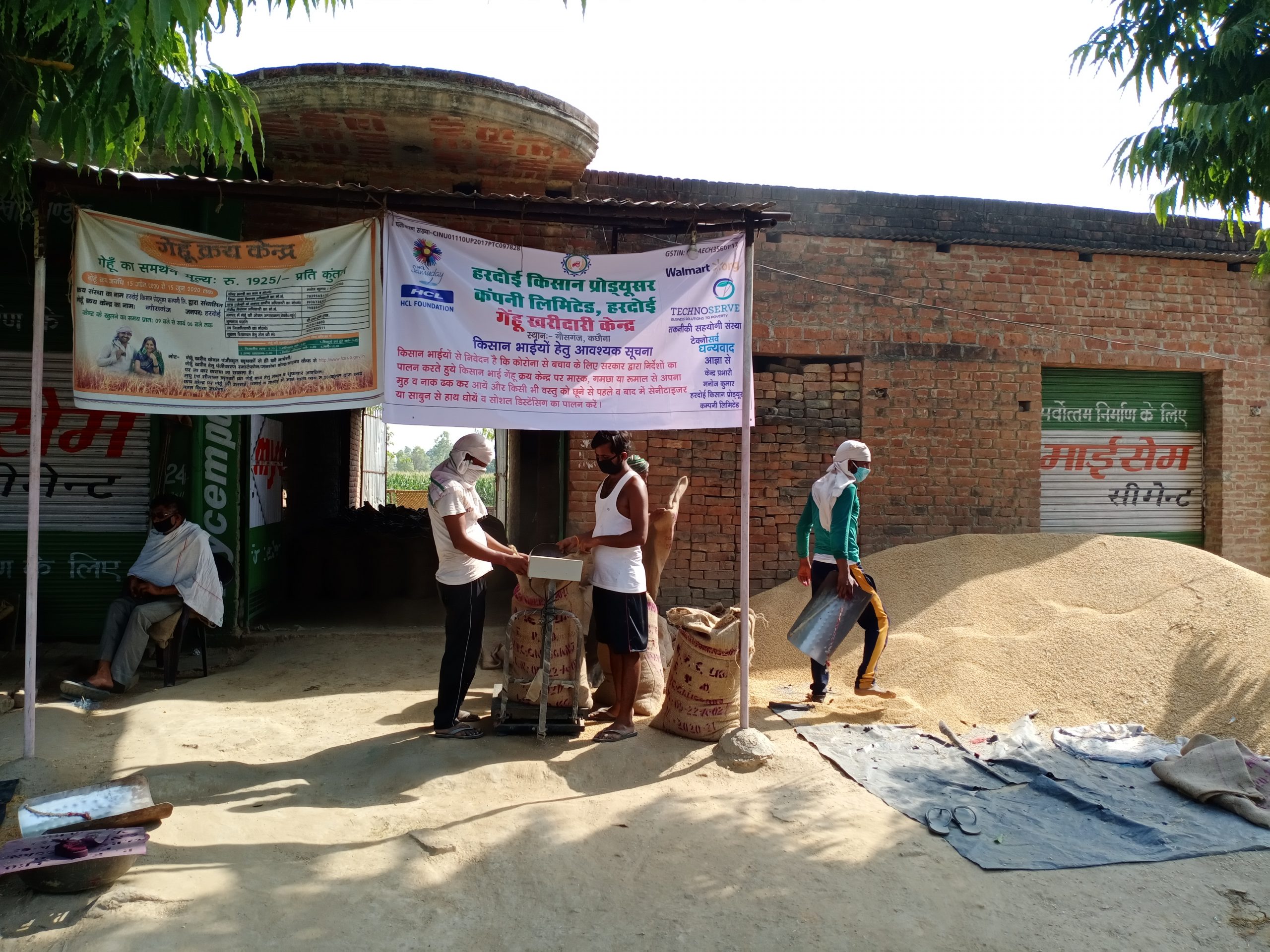 On his five-acre farm in the Hardoi district of Uttar Pradesh, India, 51-year-old Manoj Kumar surveys his fields of wheat, potato, and mustard crop. Three years ago, the father of two had helped set up a farmer producer organization — the Hardoi Kisan Producer Company Limited (HKPCL) — hoping that a collective business entity would translate into better opportunities for farming families in his community. As part of TechnoServe’s Sustainable Livelihoods Program, funded by the Walmart Foundation, Manoj’s dream is close to coming true.

Manoj played a crucial role in setting up the Hardoi Kisan Producer Company and has served as the chairperson of the company ever since. He manages numerous activities, including seed selection, application of inputs such as fertilizers, and post-harvest processing. But the company’s farmers were still struggling to maximize the economic potential of their crops.

Since March 2020, the TechnoServe team has worked with HKPCL to assess its business operations from previous wheat seasons. On closer examination, the team found several institutional and operational challenges, which were only exacerbated by the COVID-19 lockdown. Some of the daily struggles included frequent delays in payments, which resulted in a shortage of funds. Other difficulties were more COVID-specific, such as restrictions on movement and a subsequent inability to coordinate with farmer producer company (FPC) farmers. TechnoServe helped HKPCL develop a plan to overcome these challenges.

A Plan for Success

Manoj eagerly worked with the TechnoServe team and HKPCL farmers to carry out the proposed improvements. The main aim was to improve the quality and quantity of wheat provided by farmers, since this would improve the prices the crops solicited.

The TechnoServe team made [HKPCL] aware of the importance of procuring good quality material. The training helped us maintain the quality of procured wheat.”
— Manoj Kumar, wheat farmer and HKPCL chairperson

In the various communities supplying crops to HKPCL, ‘lead farmers’ were selected and trained to conduct quality checks for crops from that area. These farmers used a variety of techniques to ensure quality, including regular measurement of moisture levels to ensure each batch of wheat met a set standard. They also organized community mobilization meetings in nearby communities to create awareness among farmers about the benefits of trading through an FPC.

The next step was to ensure that this improved wheat reached better markets, which would earn farmers better prices. TechnoServe helped HKPCL approach major buyers like the Food Corporation of India (FCI), a public entity that authorizes government players like farmer producer companies to procure wheat at a minimum price on FCI’s behalf.

Any logistical costs incurred by the farmer company with respect to labor, crop sacks, transportation, taxes, and service charges are thoroughly reimbursed by the FCI. Therefore, it is more economically beneficial for farmers to sell to FCI than to certain local markets. 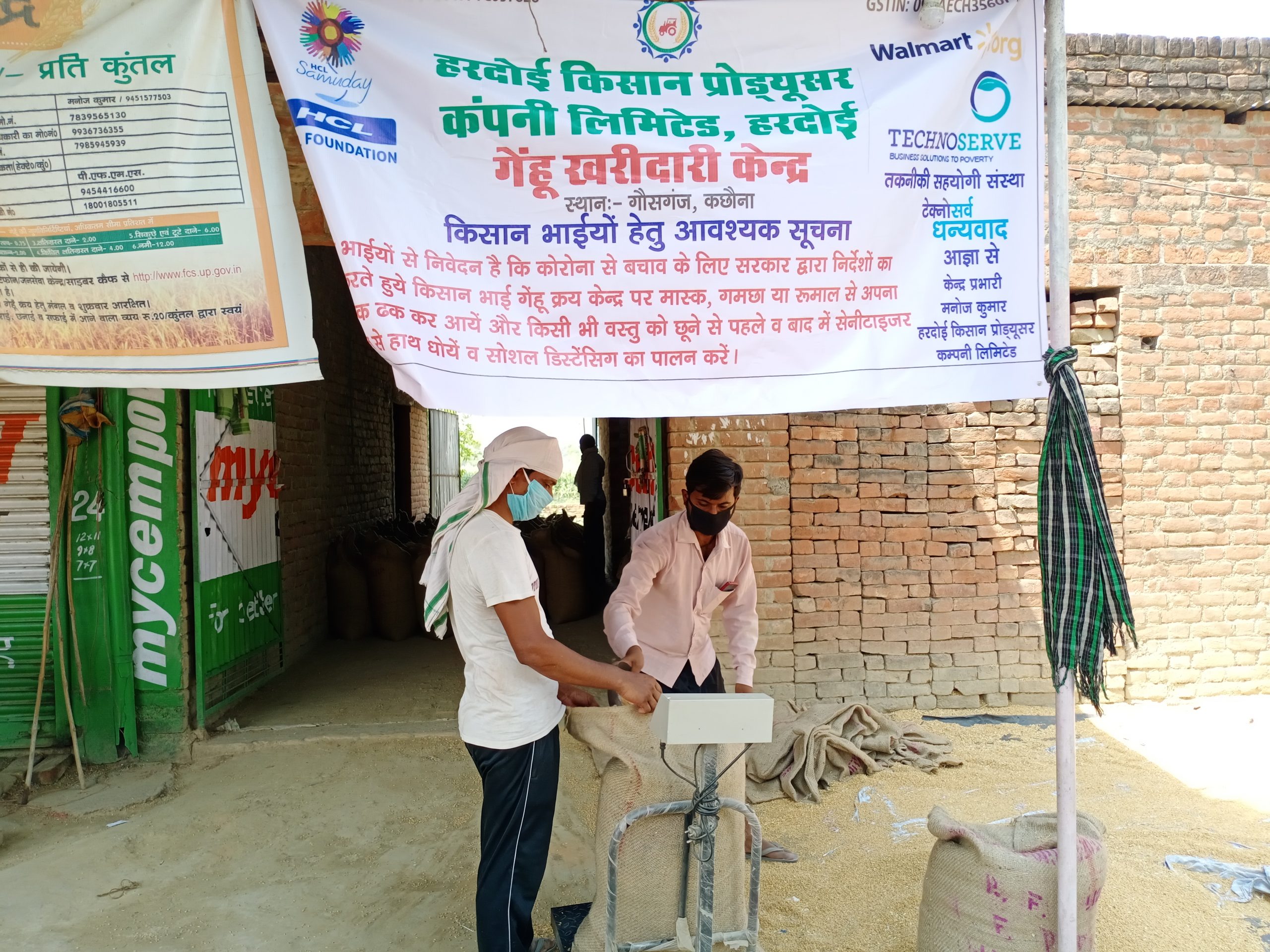 FCI and HKPCL had previously collaborated for the procurement of wheat in Hardoi in April 2019. However, this year, farmer producer companies were not included on the initial list of entities eligible to procure on FCI’s behalf. To make matters worse, the coronavirus pandemic further hindered procurement activities.

But when FCI released a second list deeming farmer producer companies to be eligible procurement partners, TechnoServe supported HKPCL to get the required permissions and to lead FCI collection, significantly increasing the quantity of wheat sales. The collection was coordinated by the center in Gausganj, a village in southeast Hardoi. Manoj and his fellow farmers were relieved to finally be gathering their crops and selling them at a secure price, especially amid the economic turmoil of a pandemic.

Manoj was particularly grateful for TechnoServe’s support with the initial false start that had delayed FCI’s procurement from HKPCL.“The [TechnoServe] team helped by registering 70 farmers on the FCI portal,” he says. “The team also started monitoring all the farmers who visited the collection center in a day. The entire process was managed well by the team.”

As a result of this hard work, HKPCL has sold a total of 572.15 MT of wheat for a sum of $162,943, turning a profit of $3,493 for the group’s 182 farmers. Farmers came from more than 18 miles away to sell their produce at the HKPCL collection center — a point of pride for Manoj, who had put in many hours alongside the TechnoServe team to mobilize support from surrounding farmer communities. From HKPCL’s humble beginnings in 2017, the company has now built trust with a broader community of farmers, boosting incomes and opportunities for all its members.

“Without support from the TechnoServe team, our achievement would not have been possible,” says Manoj. Despite a challenging year, he now farms his fields with even greater hope for the future.