Cashew has the potential to transform Benin’s economy – and the lives of the smallholder farmers who grow it. However, many farmers lack the technical knowledge they need to get the best harvest from their cashew orchards. TechnoServe is developing a digital chatbot to help farmer trainers quickly access the information they need, allowing them to effectively support more farmers. 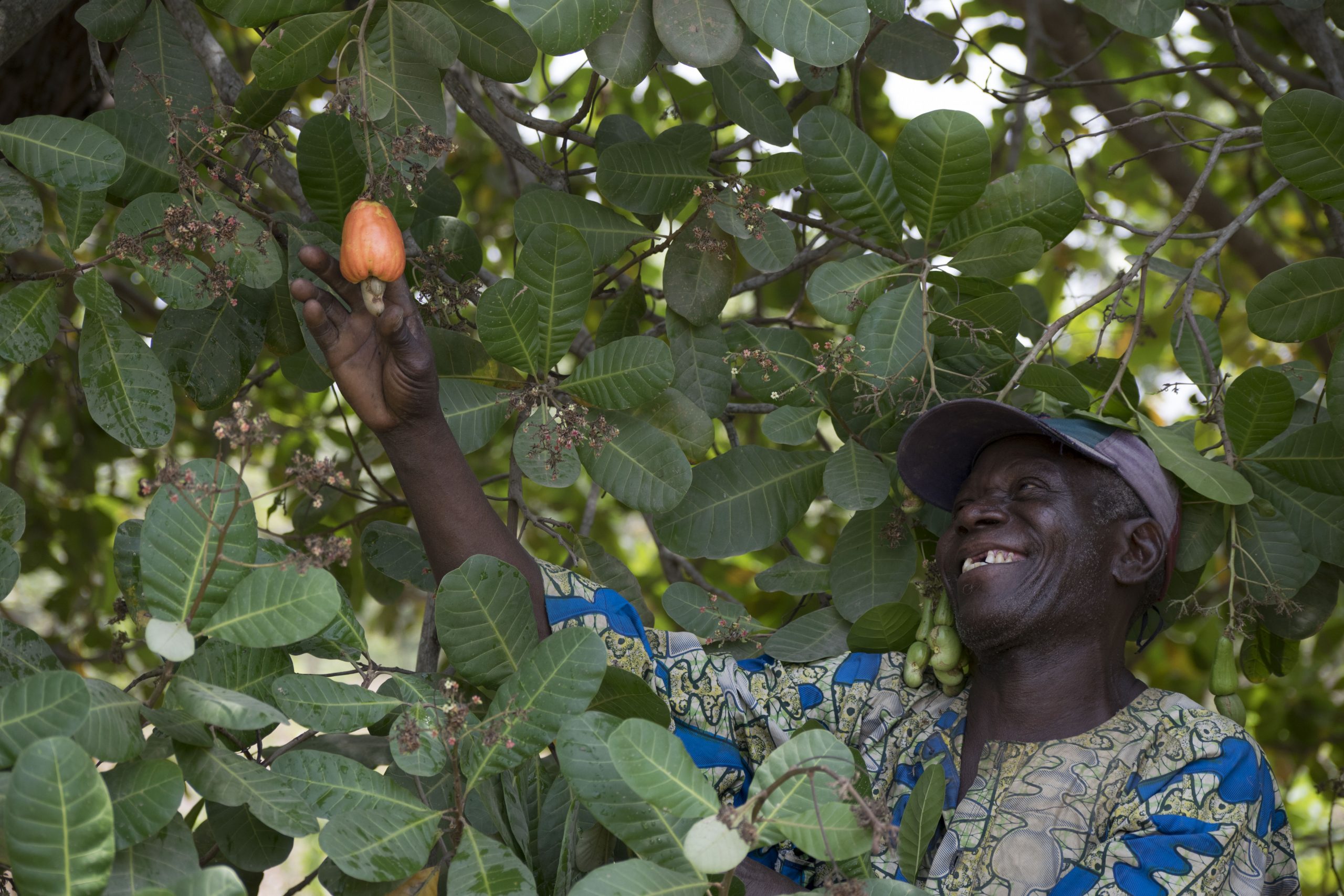 Cashew is one of the world’s most popular nuts. But who grows this tasty snack? Most cashews in developing countries are grown by farmers who own small plots of land and depend on their cashew crop as an essential source of income. Since 2015, with funding from the U.S. Department of Agriculture, TechnoServe has helped smallholder cashew farmers in Benin improve their yields, boost their incomes, and increase domestic processing.

Cashew production in Benin has grown tenfold in the past two decades. Benin’s government has an ambitious goal of tripling cashew production by 2027, which would boost its economy and thousands of farmers’ livelihoods. But expanding cashew production requires more extension workers — agricultural experts who teach farmers how to improve their crops. Currently, there are only 34 public extension agents for almost 200,000 cashew farmers in Benin.

The BeninCajù program is training community-based trainers on cashew agronomy and extension approaches to address this gap and reach the Food and Agriculture Organization’s recommended ratio of 500 farmers per extension agent. To help new extension workers get quickly up-to-speed, the program is developing a digital reference library for community-based trainers who do not have a strong background in cashew. This digital reference library includes specific instructions and photos on practices such as fertilization, pruning, and disease management — critical techniques to improve yields and thereby grow the country’s overall production and farmers’ incomes.

To help extension workers access the information they need from the content library, the team built a natural language chatbot to quickly identify answers to their questions. Chatbots are computer programs that can “converse” with users through messaging platforms such as Facebook Messenger, WhatsApp, and SMS, helping deliver immediate answers to frequently asked questions.

The public extension agents and community-based trainers are being introduced to this new tool to efficiently and readily look up answers to questions from farmers and to study on their own time key cashew farming best practices. With a built-in ability to download topics to their phone or computer, they can also use the images and diagrams to train farmers in areas with no internet connection.

The BeninCajù team used a “build-measure-learn” approach to develop the chatbot, working to get a prototype in the hands of users quickly, which allowed the team to get rapid feedback before building a complete solution. With this approach, the team developed and tested three different chatbot solutions in just six weeks. 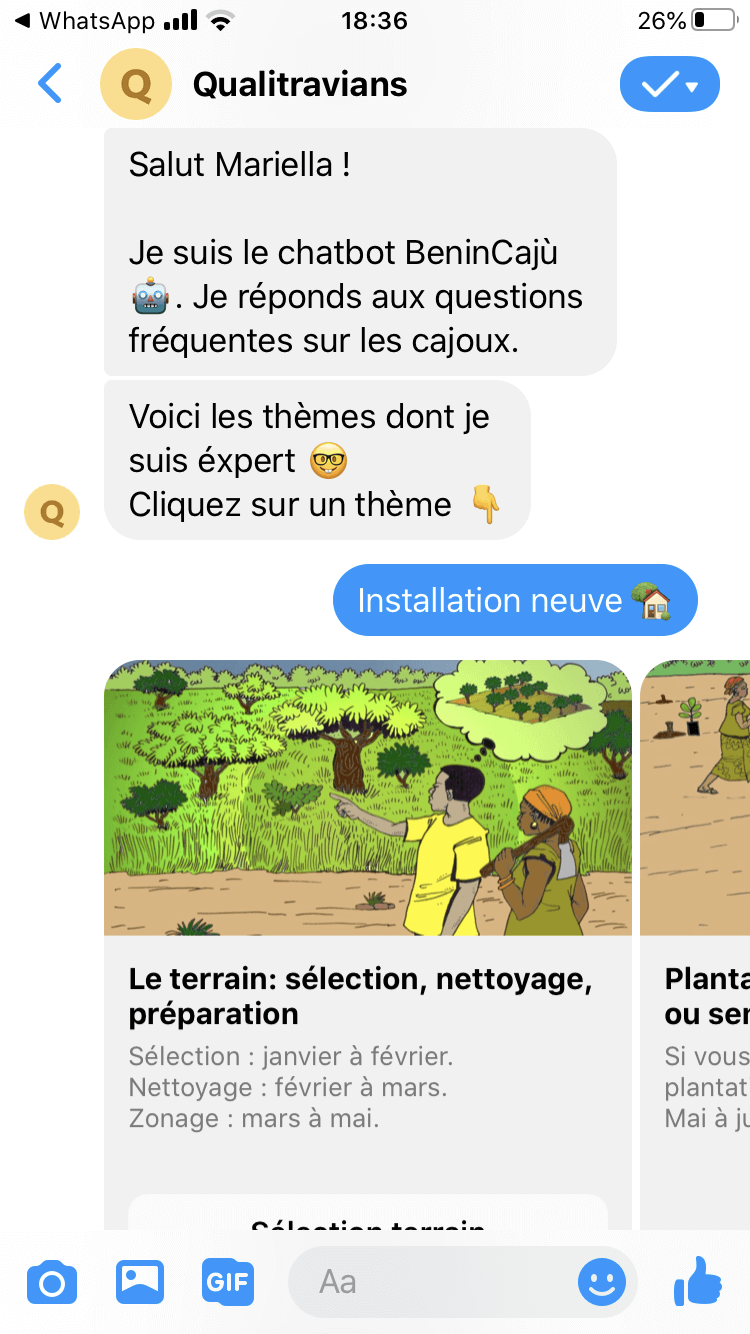 As one example of this rapid development/test cycle, the initial “minimum viable product” was built on Facebook Messenger in one week and then deployed for testing with extension workers in Benin. Through testing, the team learned that Facebook Messenger was not the preferred platform, but that there was significant interest in the chatbot support resource. As a result, the program pivoted to a solution and underlying technology using WhatsApp and SMS. The team is currently working on the roll-out of this version, using natural language processing to allow users to send texts with questions that the chatbot can interpret and answer. The project team will monitor chatbot responses and improve the content and accuracy of answers over the coming months.

The chatbot is only the start of the BeninCajù program’s work to develop digital solutions tailored to user needs through the build-measure-learn approach. They are also planning to offer mobile-based certification programs and enlarge the digital reference library to include real-time pricing information and weather warnings. With these tools, the program will be able to reach more of Benin’s nearly 200,000 cashew farming families and better support them as they improve their incomes and transform their lives.

Learn how TechnoServe is using technology to fight poverty around the world.