Temperatures are rising, the nutritional value of food is declining, and food systems are strained. Climate change is at the core of many food security challenges. How should we respond? Although the challenges ahead are daunting, there’s hope.

As the Kaduna River snakes its way through Nigeria’s high plains, it deposits sediment that enriches the surrounding soil for agriculture.

This loamy soil helps produce one of Nigeria’s most important crops: tomatoes. Ladi Godwin, a 34-year-old farmer in Kaduna State, has been growing tomatoes for more than a decade.

As the amount of food needed rises, feeding the world will also require even more complex transportation, sales, and “last mile” delivery systems. Extreme events, like hurricanes or floods, can create instability across these already delicate systems.

And these challenges will impact food security both for Nigerians and people around the world who rely on smallholder farmers for food. According to the U.N., food demand is set to increase by between 60% and 100% by 2050 due to population increase.

Why is climate change such a threat to global food security? Read on to learn four top factors behind this phenomenon – and how to help.

Farmers around the world report that increasingly unpredictable weather is threatening their crops. And the data bears this out.

A recent report found that climate change had reduced global agricultural productivity by an astounding 21% since 1961. In warmer regions like Africa and Latin America, productivity dropped 26-34%.

In 2019, a study of the top 10 global crops found that climate change is reducing the worldwide production of staples such as rice and wheat, which primarily affect developing countries.

These climate-related changes could cause global hunger and malnutrition to increase nearly 20% by 2050, according to a recent report, impacting millions around the world.

Smallholder farmers, who produce nearly 80% of the world’s food supply, are an essential part of the solution. But farmers like Ladi struggle to make their farms more productive in the face of increases in temperature, changes in rainfall patterns, and increased pests and diseases that impact both crops and livestock.

A TechnoServe program in Nigeria helped Ladi – and many other farmers across the region – reduce post-harvest losses, adopt climate-smart technologies, and learn good agronomic practices.

Ladi was able to use cooling methods to preserve her harvested tomatoes for longer and learned at-home processing methods needed to turn her ripe tomatoes into pastes, extending the shelf life of her crops and increasing food security for people across the supply chain.

I was amazed by the yields we were able to get from the small demonstration plot. The nursery was also able to withstand the heavy rains and outperformed our own varieties.

And new, climate-resistant seed varieties also helped Ladi get more out of the same amount of land. The new seeds were able to survive the heavy and more frequent rains that battered Kaduna State during the farming season.

TechnoServe is working with thousands of smallholders like Ladi to improve their farm productivity while limiting their own carbon emissions.

When Cyclone Tauktae barreled across India’s western coast in May 2021, it left chaos in its wake.

In addition to causing nearly 200 fatalities, the storm decimated the region’s agriculture, taking farmers’ livelihoods with it. TechnoServe India Country Director Punit Gupta reports that mango farmers working with TechnoServe in the western state of Gujarat were “devastated” by the impact.

“After the storm, only 10% of the mango remained available for harvesting,” he recalls. “This immediate loss for the farmers translates to 50% of their annual average income from mangoes.”

Severe weather events occur more frequently as a result of climate change, which also creates problems for those who need regular market access as consumers or suppliers. These disasters can also cause price fluctuations, damage to infrastructure, and disruptions to transport, manufacturing, and food markets.

These challenges can be alleviated by strengthening the resilience of farmers, entrepreneurs, and businesses that operate within a market system. But solutions also need to address the overall sustainability of market systems themselves.

TechnoServe works with farmers to increase their productivity and incomes while providing the tools and connections they need to cope with both short-term and longer-term climate disruptions.

In India TechnoServe is also helping Farmer Producer Companies (FPCs) improve the resilience of the value chains they work in. In the northern state of Uttar Pradesh, FPCs now collect farmers’ harvests directly and store them in weather-resistant storage areas.

To the southwest, in Madhya Pradesh, TechnoServe helps smallholder farmers guard against weather-related shocks through increased mechanization, crop diversification, higher rates of savings, and better access to seeds, milling, and other value-adding techniques.

In Andhra Pradesh, India, organic kitchen gardens – small plots for growing one’s own crops near the house –  are helping smallholder farmers save money and access healthy, nutritious food during this challenging time. TechnoServe has organized training sessions, distributed seeds, and provided support to over 450 women farmers from 20 villages in the regions of Paderu and Chintapalli of Visakhapatnam district.

Participants harvest their produce and use the vegetables from their kitchen gardens for everyday consumption, decreasing their reliance on unstable systems and increasing their certainty about their next meal.

By taking this diversified approach, farmers can better prepare themselves against climate-related market disruptions.

Even if climate change reduces yields, a potato is still a potato – right?

Not exactly. According to many studies, it is actually a less nutritious potato.

Rising carbon dioxide levels have been linked to lower levels of nutrients like zinc, iron, and protein in a range of staple crops. One Harvard study found that carbon dioxide reduced protein levels between 6-14% in crops including rice, wheat, and potatoes.

Since more than three in four people around the world derive most of their daily protein from plants, the implications of this decline could be enormous.

Rising temperatures can also lead to increases in mycotoxins – naturally occurring toxins produced by certain molds – in food, which can be extremely harmful to humans who consume them. 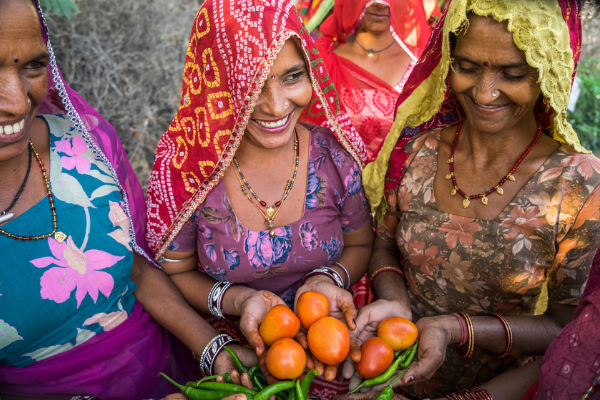 All told, climate change is estimated to cause an increase of between 8.5% and 10.3% in the number of malnourished children in all developing countries. Malnutrition can not only cause serious health consequences like anemia, blindness, and even brain damage but can also limit a country’s economic potential by decreasing the productivity of its people and increasing healthcare costs.

However, even if climate change is affecting the inherent nutritional value of crops, there is some hope for improving nutrition at scale. Food fortification – the process of adding micronutrients to food – can significantly improve health and well-being in communities with high levels of malnutrition.

At a relatively low cost – roughly $0.15 per person annually in low-income countries – food fortification represents one of the most cost-effective solutions to improving a population’s nutrition.

In Africa, TechnoServe is working with numerous food companies to improve their fortification processes. These efforts have resulted in millions of metric tons of more nutritious foods reaching the market and improving the health of consumers.

Still farming in the rich soil of Kaduna state, Ladi also has more certainty about her next meal now. And you can help others feel the same assurance.

A farmer’s tough journey to a sustainable income through coffee highlights the resilience of smallholder farmers. Hear about how Sinderi turned a challenge into an opportunity – and brought her community along for the ride.