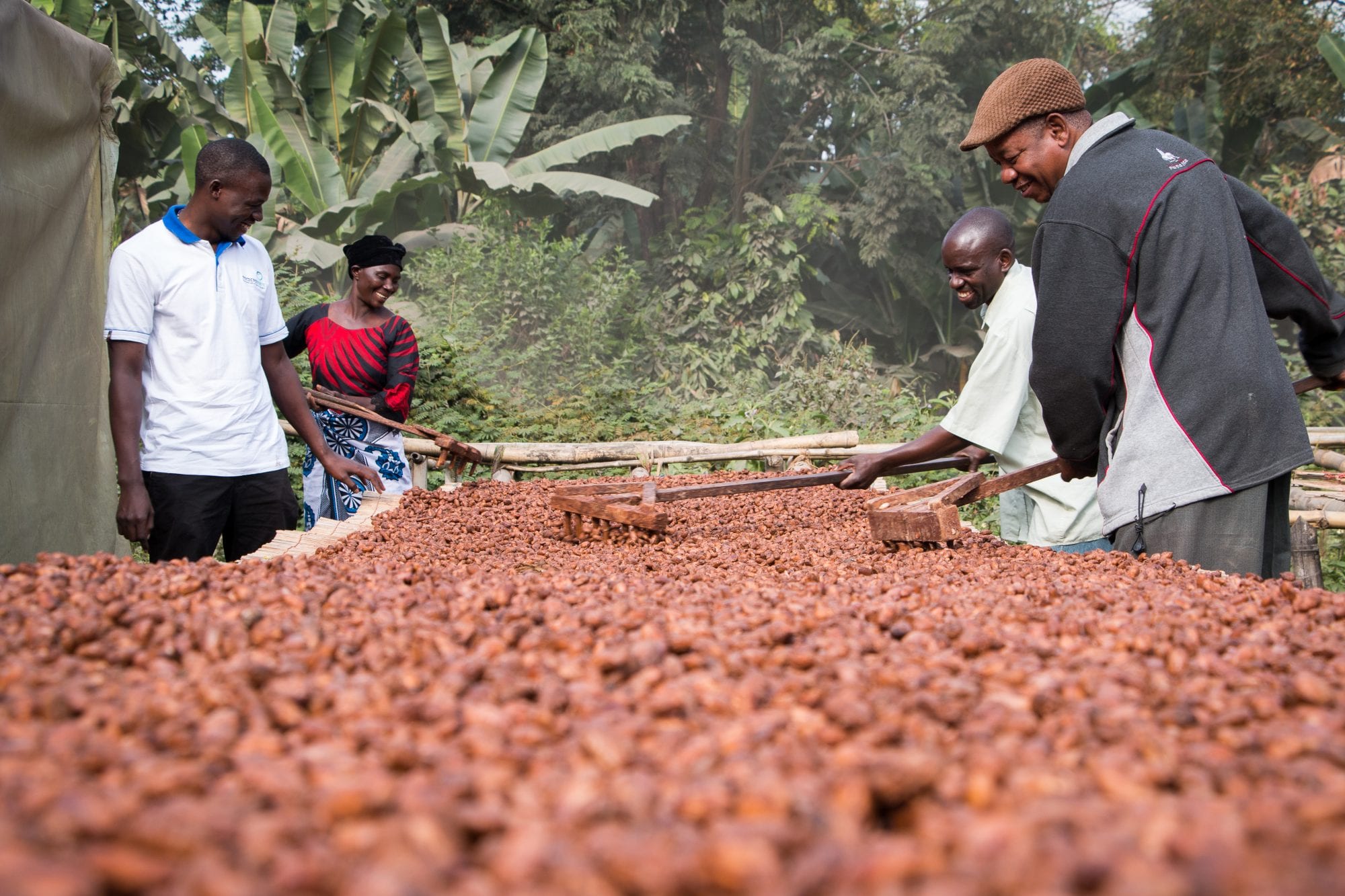 This Valentine’s Day, Americans will spend $2 billion on chocolate and candy. But where does this chocolate actually come from? Between 80% and 90% of the world’s cocoa is grown on small family farms in Africa, Asia, and Latin America. Farmers here work hard to keep their trees productive, but worry about how pests, changing weather patterns, and price fluctuations will impact their livelihoods and their families. Meet a few of the hardworking farmers who are growing cocoa – the essential ingredient in your favorite bar of chocolate. 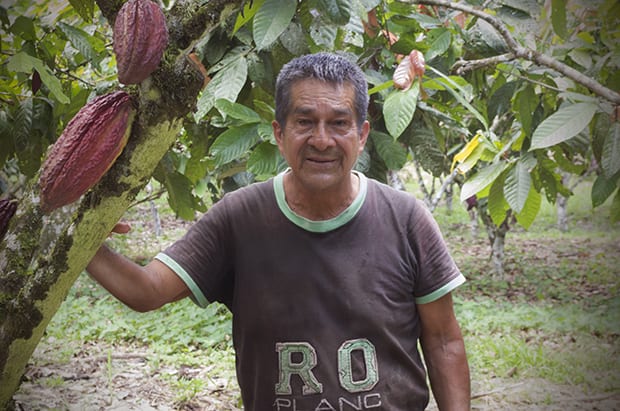 At the age of 66, Ignacio Pascal Alarcón is an experienced cocoa farmer in central Peru. However, he wasn’t always the expert he is today. In the 1970s, he grew coca leaves – a main ingredient for cocaine, but the region’s most viable cash crop at the time. After being forced off his land due to drug-related terrorism, Ignacio tried hard to stay afloat, working in factories and hoping to one day reclaim his land and his livelihood from the violence.

Growing cocoa has given me the life I always wanted.”
– Ignacio Pascal Alarcón

In 1998, he decided to buy a five-hectare cocoa farm in the Peruvian countryside. “At that time it was very difficult to start over with an alternative product because the main industry was still coca cultivation and the drug trade,” Igancio recalls. He ran into many obstacles along the way, including pests, low yields, and violence from the drug trade. Yet despite these challenges, Ignacio has been able to turn his cocoa farm into a successful enterprise using agronomic training from TechnoServe. “I have been through difficult times in my life – losing part of my right hand, growing coca, and working in a factory,” he explains. “Growing cocoa has given me the life I always wanted.” 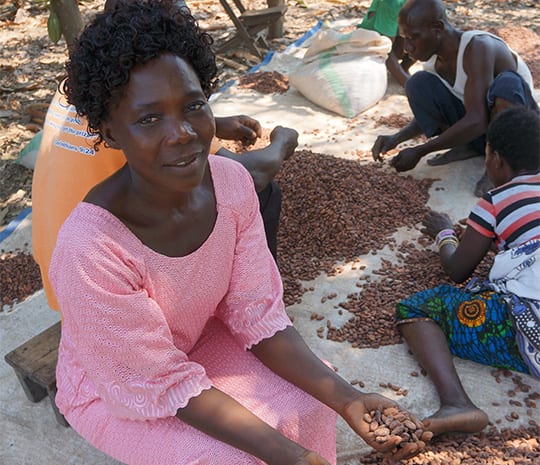 Although women contribute a large share of cocoa labor on the farm – such as planting, pruning, and harvesting – they are rarely informed of just how much income the cocoa is providing for their families, and few fruits of their labors make it to their own pockets. Crize Kisungu – affectionately known as Mama Crize in her community – became a leader in her area after participating in TechnoServe’s Cocoa Quality and Market Access program in Tanzania.

“In the past, it was very difficult for women to become leaders because many people, including the women themselves, didn’t have the knowledge that women can be good leaders,” she says. “But now it’s easier, because people understand that women can be good leaders.” Mama Crize was unanimously elected treasurer of the Tujikomboe Farmer Business Group. “I liked being the treasurer,” she explains. “The group trusted me in this role. I was responsible for the group’s finances and managing money from the cocoa sales and the money distributions to members. I also maintained records of all our transactions.” 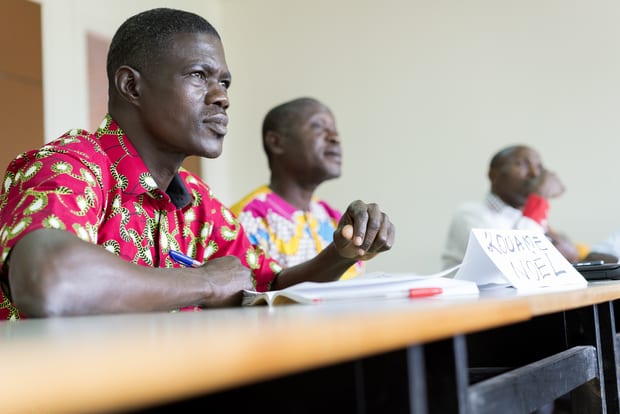 In Côte d’Ivoire, the world’s leading cocoa-producing nation, one quarter of the population depends on the cocoa bean and its value chain for a living. Most cocoa is grown by smallholder farmers who earn, on average, $0.50 per day. In many cocoa-producing nations, cooperatives are a crucial link in the cocoa value chain, bridging the gap between farmers and markets, and often providing the only support services and goods available to farmers in rural areas.

We learned a lot about how co-op executives should behave and about good co-op management.”
– Traore Laye

Traore Laye is the chairman of the Scoopakam cooperative in Divo, Côte d’Ivoire. When he first joined the cooperative, he was wearing too many hats – running back and forth between the mill and his office. Without the time or the training to properly organize Scoopakam’s finances, he mixed them together, making them unclear and inefficient for the cooperative, farmers, and buyers alike. After working with TechnoServe for eight months, Traore is proud of the progress the cooperative has made. “We learned a lot about how co-op executives should behave and about good co-op management,” he recalls. “We reduced spending in unnecessary areas and used that money to go towards hiring the new employees.” 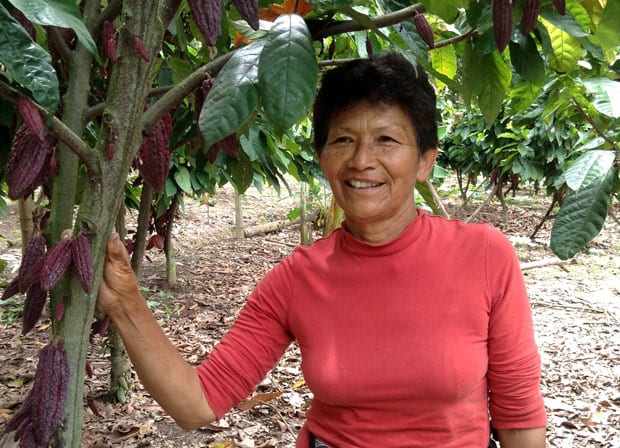 Belinda Saldaña left her rural hometown of Piscoyacu, Peru, decades ago to work as a maid in Lima. She worked long hours to earn a living while raising a family on her own. “I realized that I wouldn’t be able to get ahead with five children and little income,” Belinda recalls. Eventually, she returned to Piscoyacu and decided to plant seven hectares of cocoa trees on land she inherited from her parents. “I didn’t know anything about cocoa,” she admits.

I will proudly leave behind an additional source of income for my children and grandchildren.”
– Belinda Saldaña

After struggling to make her cocoa farm profitable, she decided to join a TechnoServe training program targeting farmers in her area. Through the program, she learned techniques for improving the productivity of her farm, including when to prune, irrigation techniques, and what fertilizer to use. “I’m very happy because even though I’m 60 years old, I realize that I can continue learning. By using the [training], I’m sure that I will have one of the best cocoa farms in the area,” Belinda says. “I will proudly leave behind an additional source of income for my children and grandchildren.”