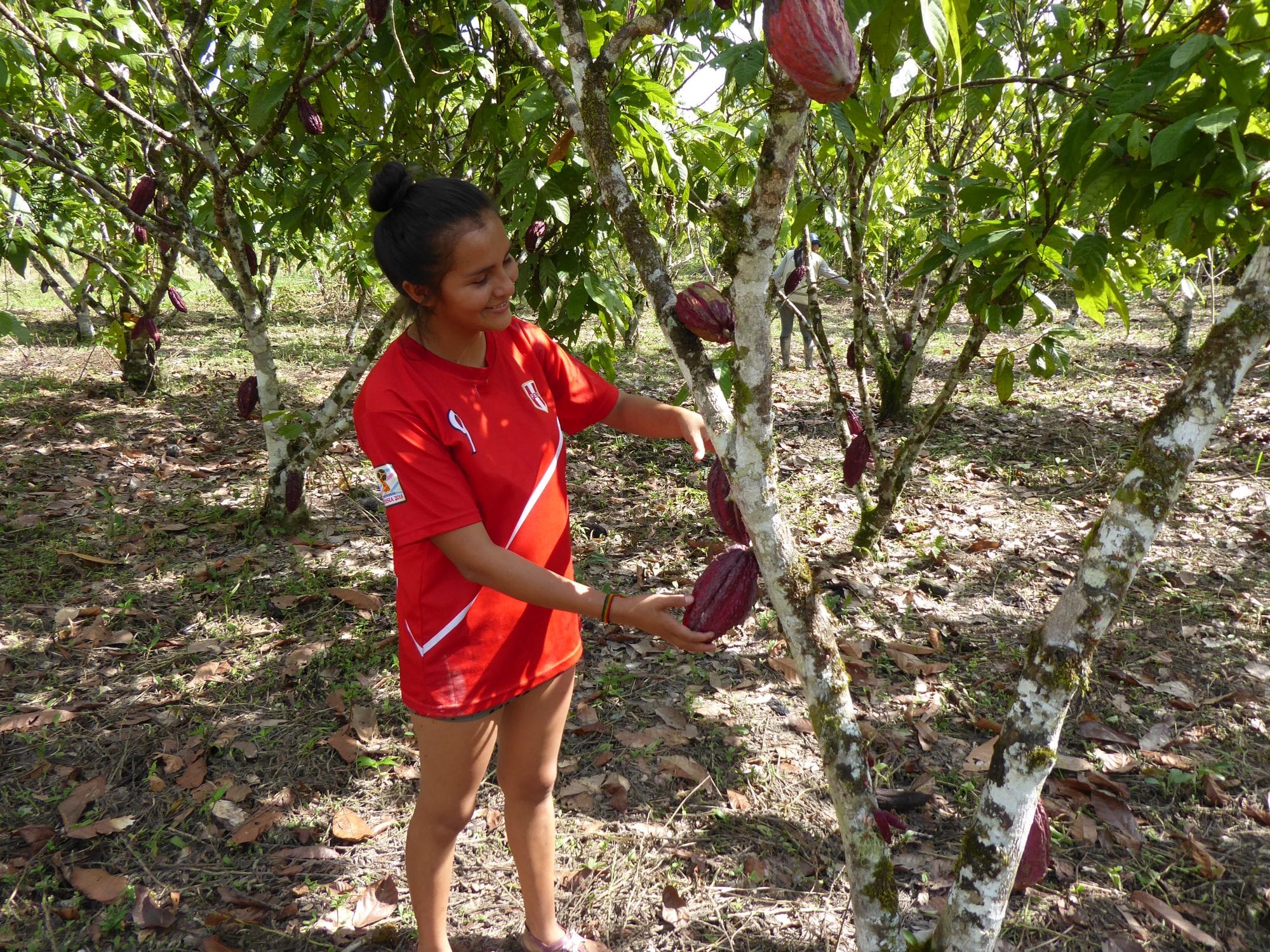 Sunlight streams through the gaps between the cocoa trees on Dara Obispo’s tidy one-hectare plot, located just off the main road in the village of Los Cedros. The 19-year-old is cheerful as she moves from tree to tree, inspecting the cocoa pods and buds.

But just a few years ago, neither the farm nor Dara’s life were so serene. Dara became a single parent at the age of 16, around the same time that she lost her own mom. With just the occasional support of her grandparents, she was left to take care of her young son. She breaks down crying as she recalls how she felt at the time: “It’s difficult when you’re a single mother, and you know that, one way or another, you have to take care of your son.”

Dara decided to take over the family’s abandoned cocoa farm as a way to earn a living. However, she knew it wouldn’t be easy, as the trees had grown far too tall and unproductive, and weeds were rampant. “It was in such bad shape, I felt discouraged from working the plot,” she says.

Cocoa is what supports me and my son […] I want him to remember that his mom set him on the right path.”
— Dara Obispo, cocoa farmer in Peru

Cocoa is booming in Peru and has created sustainable livelihoods for thousands of farming families, but women — and especially female heads of households — have often been left behind. Because women are usually the ones taking care of the children, preparing food, and looking after the home, they historically have not had access to the same training opportunities as men.

The MUJERES project, funded by the West Foundation and Manhattan Beach Community Church and implemented by TechnoServe, is a pilot program working to close the gender gap in the cocoa value chain by providing unique, targeted training to 90 women heads of household. 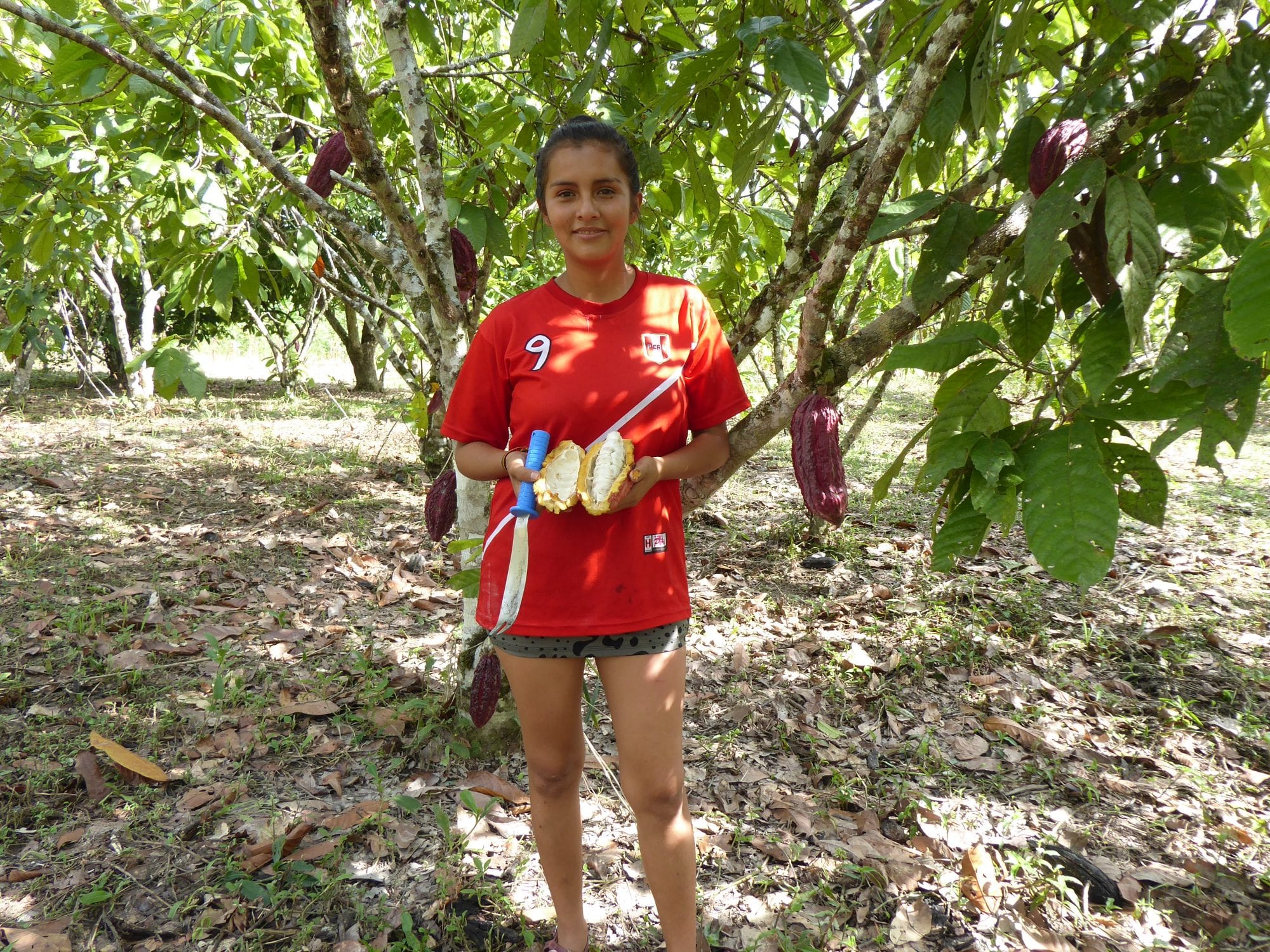 Dara heard about the MUJERES project in 2018 and decided to join. Through the training, she gained practical knowledge about how to manage her crops. More importantly, she realized that she could be a successful cocoa farmer and a mother. So, with her infant son strapped across her back, she set to work taming the farm. She pruned back the cocoa trees, cleared out the weeds, and started applying fertilizer.

The first year she started farming, Dara only harvested about 110 pounds of cocoa beans. But by constantly working to implement best practices and improve her farm, she was able to increase her production to more than 815 pounds this past year. The improved production has helped change Dara’s life.

The best part has been how lots of women, moms, come together.”
— Dara Obispo

Before, she had to frequently work as a day laborer to make ends meet; now, she is able to spend far more time at home and on her farm. Dara typically takes care of her son in the morning, then leaves him with her grandmother in the afternoon so that she can tend to her crops. “Now I work on my farm, and when it gets to be too much, I can rest,” she says. “I’m my own boss.”

Dara also found a sense of community in the program’s workshops and field days. There, women discuss solutions to their biggest challenges, like the carmenta forseminis, a caterpillar that burrows inside the cocoa pod and ruins healthy beans. “The best part has been how lots of women, moms, come together,” she says. “Sometimes, for example, we don’t know how to control the carmenta caterpillars, and someone will say, ‘Oh, I’m controlling them this way.’”

Dara wants to continue to improve her farm. “Cocoa is what supports me and my son,” she says. “I want him to be a professional. Even if I don’t have much, I want to give him that. So he can do something with his life. I want him to remember that his mom set him on the right path.” She smiles now, as she looks out over her farm. “Having a child isn’t a mistake. It’s what motivates you to keep working hard.”